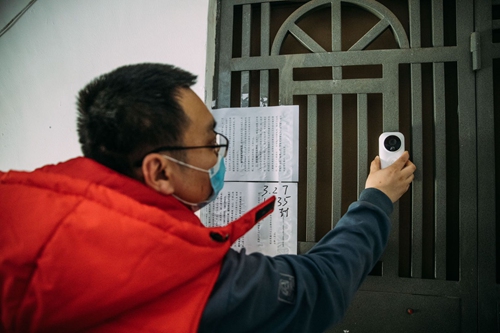 Laoshan community of Shijingshan district uses an intelligent doorbell with a monitoring function to ensure strict enforcement of home isolation.

Liu showed reporters how the doorbell works. As soon as the environment or status of the door changes, such as someone ringing the doorbell, the door opening, or someone waling past the door, an Mijia app installed on the community worker's phone will send an alarm and a six-second real-time monitoring video.

Some communities in Haidian district also applied this technology for monitoring home supervision.

"It (the smart doorbell) was first donated by Xiaomi, and we bought some after seeing their usefulness," said Liu. "To ensure privacy, we will ask permissions of returnees from other parts of China, but overseas arrivals are forced to install the devices."

"It doesn't mean we don't trust him, it is just a requirement of ensuring strict supervision," said Zhu, who said that people under home isolation must report their temperatures twice a day to community authorities by sending pictures or videos through WeChat.

Also in Shijingshan district, infrared thermometers have been installed at public locations, which could test one's temperatures from two meters away.

The district launched 579 digital access cards for entering communities, which use big data to administrate residents' home isolation during the time of preventing COVID-19, according to the new media center of Shijingshan.