A Chinese archeology team revealed that they had deployed high-tech tools such as multi-beam hydrographic surveyor and underwater 3-D sonar imaging to track down and preserve Jingyuan, a navy warship that fought more than a century ago. 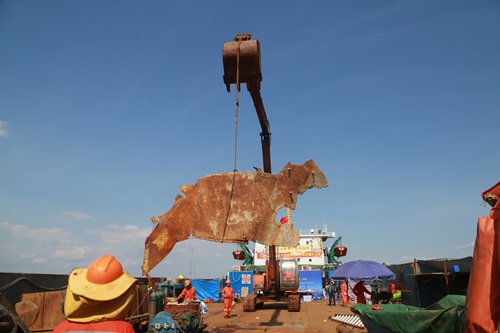 Part of the Chinese warship Jingyuan is lifted out of waters near Zhuanghe, Northeast China's Liaoning Province, in September 2018. (Photo: VCG)

Archeologists revealed the finding during a Thursday conference to select China's 2018  top 10 archeological discoveries, which will be announced on Friday.

A multi-beam hydrographic surveyor was used for obtaining the image of the remains of the naval battle and helped researchers confirm the ship was upside down, members of the archeological team responsible for locating Jingyuan said at the conference.

Archeologists identified the shipwreck from a plate carrying the warship's name after it was found on the seabed 12 meters underwater with its main body covered in sludge.

This finding is qualified for joining the contest for China's  annual top 10 archeological discoveries. Started in 1990, the contest presents to public the past year's archeological achievements, along with China's newest archeological theories, methods and technologies.

Other technologies used to locate the ship, such as underwater 3-D sonar imaging and differential positioning, paved the way for the research and investigation of other large-scale sunken ships, said the archeology team.

Jingyuan has been lying underwater for more than a century when it was discovered in 2018 summer. Parts of the ship, such as its bilge and front end, were severely damaged.

So the archeologists took measures to prevent the ship from further damage. They put zinc around the ship's body to protect it from corrosive salts.

Fortunately, the ship's living rooms and weapons on deck were well-preserved, said the archeological team on the Thursday conference.

Thanks to this, the underwater exploration found more than 500 items made of iron, glass, porcelain, leather and other materials. Also, old guns and shells, which were not on the ship's records, were also found during the investigation.

Built at the Vulkan shipyard in Germany, Jingyuan was incorporated into one of Beiyang Fleet in the late 1880s.