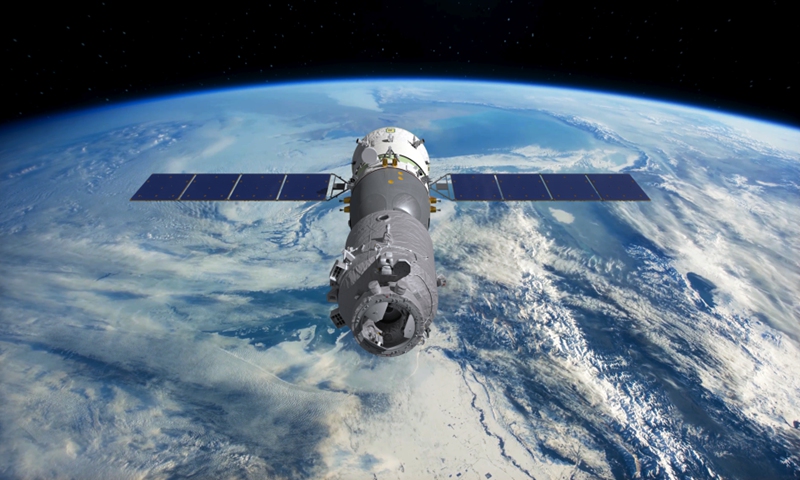 China pulled off the country's first-ever automated fast rendezvous and docking of a manned spacecraft with China's orbiting space station core cabin on Thursday, after the Shenzhou-12 manned spacecraft was successfully launched on the Long March-2F Y12 carrier rocket from the Jiuquan Satellite Launch Center.

Compared with Shenzhou-11 which took over 40 hours to dock with Tiangong in 2016, the new vessel merely took six and a half hours to achieve the feat.

The newly adopted docking capability was first used in the Tianzhou-2 mission in late May, which helped the craft to realize a docking with the space station's core module in eight hours.

This success also shows that China has developed a highly advanced automation technology application in space and space tracking and monitoring capabilities, Wang Ya'nan, editor-in-chief of the Aerospace Knowledge magazine, told the Global Times on Thursday.

The speedy docking performance has been backed by a number of technological breakthroughs, including updates in the core subsystem of the Shenzhou-12 spacecraft, and China's home-developed BeiDou Navigation Satellites System.

A new feature that has assisted in the fast docking is the "midway aiming point," located at the lower back of the space station. It is the "transfer station" between the core cabin and the cargo ship or manned spacecraft before rendezvous and docking takes place, the Global Times learned from the China Academy of Space Technology (CAST).

Through this point, it would be most convenient and quick to dock with the station from all directions, saving time and propellant of the spacecraft by up to 40 percent during the process.

The introduction of a midway aiming point reflects the advancement and confidence of China's docking capabilities. Developers at CAST likened it to climbing a mountain, in which the aiming point is the "match point" near the summit, and by passing it climbers can adjust their speed and rhythm until they reach the top.

Another key technological advancement lies in the Guidance, Navigation and Control (GNC) subsystem of the Shenzhou-12 , the core subsystem in charge of a series of operations, the Global Times learned from CAST.

The GNC system was first adopted on board China's manned spacecraft in 1999, and has been fully updated based on Shenzhou-11's technical status.

It uses units that had been verified from previous launches, including those from the Tianzhou-1 cargo spacecraft, the new-generation manned spacecraft, and the Chang'e-5 spacecraft, while updating system functions to adapt to more complex situations in the space station construction phase.

China's homemade BeiDou Navigation Satellites System, or BDS, has also played a crucial part in the accurate positioning of each spacecraft that ensured the smooth and safe "space kissing."

During the mission, the Xi'an Satellite Control Center has worked together with the Beijing Aerospace Control Center on tracking and monitoring China's space activities, the center told the Global Times on Thursday.

Deploying its stations located in over 10 regions across the country, including Kashi, Weinan, Qingdao, Xiamen and Hetian, the Xi'an center will track the real-time status of in-orbit astronauts throughout the three months of their stay.

The center has reached a measurement accuracy of centimeters for low-Earth orbit spacecraft, allowing it to pinpoint every movement during the craft's docking maneuver and other operations.

Apart from ground control centers, China has also dispatched Yuanwang space tracking ships to safeguard the mission from the ocean.

Making the safety of astronauts a priority, the Shenzhou-12 mission's research team has also developed a new emergency response system to ensure that the astronauts can be rescued both in space and at the launch site.

According to CAST, two Shenzhou vessels and launch vehicles were transported to the launch site, which means that Shenzhou-12 has a backup spacecraft and a rocket in the event of an emergency.