HONG KONG, May 21 (Xinhua) -- Researchers from the Hong Kong Polytechnic University (PolyU), who developed the Mars Landing Surveillance Camera (Mars Camera) and evaluated the terrain of the landing zone in Mars, were one of the contributors of the country's first Mars probe. 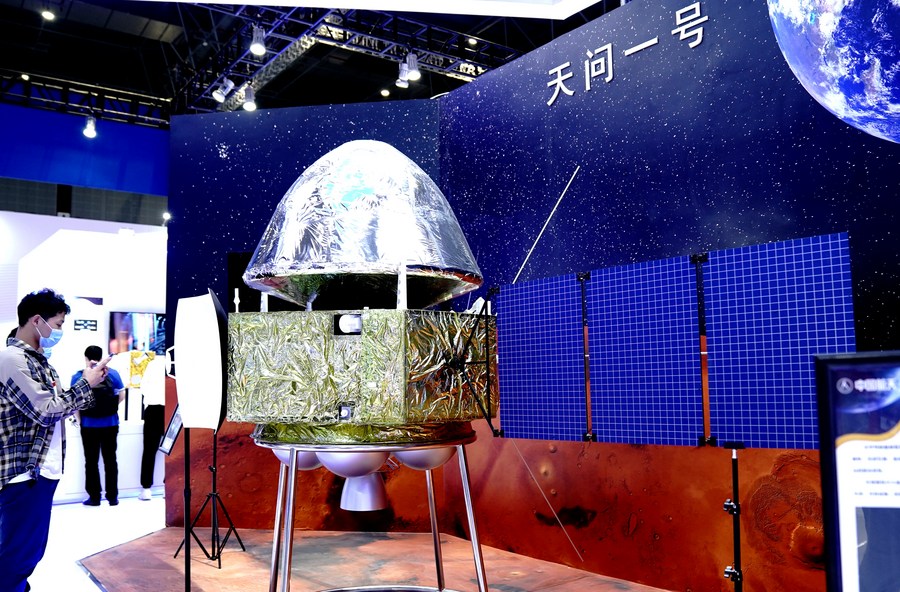 The lander and rover of China's Tianwen-1 mission landed on Mars on May 15. It was the first time China has landed a probe on a planet other than Earth.

Tianwen-1, consisting of an orbiter, a lander and a rover, was launched from the Wenchang Spacecraft Launch Site on the coast of southern China's island province of Hainan on July 23, 2020. It was the first step in China's planetary exploration of the solar system, with the aim of completing orbiting, landing and roving on the red planet in one mission.

Located on the outside top surface of the Mars lander platform, the Mars Camera monitors the landing status, the surrounding environment and movements of the rover with respect to the unfolding and status of the solar panels and antennae. The information is critical for the successful movement of the Mars rover onto the Mars surface, according to PolyU.

Led by Yung Kai-leung, PolyU's professor in precision engineering, the research team successfully completed and delivered the Mars Camera with the corresponding space qualification experiments in less than three years.

The Mars Camera, weighing only about 390 grams, has a strong shell to withstand extreme temperature differences and operate in extremely low temperatures on the surface of Mars.

Yung told a press conference on Friday that in order to take ultra-wide images and films, the Mars Camera needs to be light, with wide-angle shooting and controllable image deformation. At the same time, it should be able to withstand great impact force and overcome challenges brought by radiation and mechanical vibration, and maintain very high stability.

Invited by China Academy of Space Technology, Wu Bo, a professor from PolyU's Department of Land Surveying and Geo-Informatics, led his team to analyze and evaluate Mars globally, and screened out three candidate landing areas, including the Utopia Planitia where Tianwen-1 landed.

Based on detailed measurements of the terrain and topography, the team successfully searched out several possible landing sites for the Tianwen-1 management team to choose from.

Secretary for Innovation and Technology of the Hong Kong Special Administrative Region government Alfred Sit Wing-hang said that PolyU was once again invited to participate in the country's important space mission, which fully demonstrated Hong Kong's strength in scientific research and that Hong Kong is an important force in national science and technology development.

PolyU has been contributing to the nation's space projects since 2010. As part of the nation's lunar exploration program, Yung collaborated with the China Academy of Space Technology to develop a "Camera Pointing System" for the Chang'e-3 lunar probe in 2013 and the Chang'e-4 probe which made a historic landing on moon's far side in 2019.