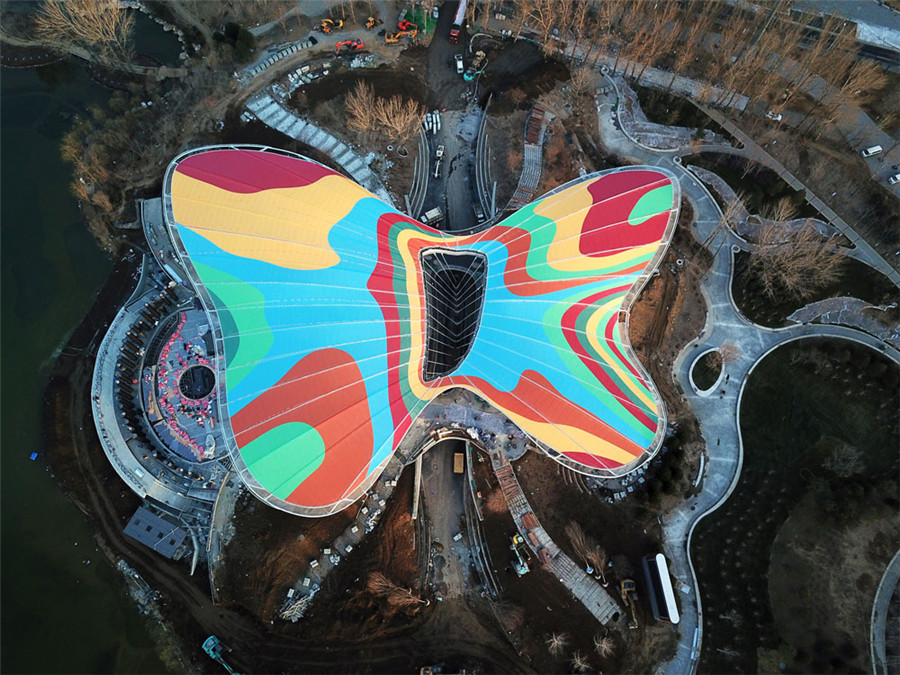 The multicolored Guirui Theater, shaped like a butterfly, will be used for the opening and closing ceremonies of the horticulture expo. (Photo: Xinhua)

The ongoing International Horticultural Exhibition 2019 in Beijing is all about gardening, but it doesn't shy away from high technology that improves visitors' experience.

It's like having a tour guide at hand, said Guo Ziliang, an official at the Beijing World Horticultural Expo Coordination Bureau, the expo's organizer.

"The app shows people how to conveniently and efficiently make their way through the park," he said. "It also helps improve the park's reception capacity."

The app, available in bilingual versions-English and Chinese-can be downloaded for free from online app stores.

At the botanic park, one of the core areas of the expo, more than 100 projectors were installed to digitally recreate mangrove forests and the environment surrounding them: tropical seas, tides and beaches.

With sound, light and electrical effects, the exhibition shows how mangroves, one of the very few vegetation environments that can survive in coastal waters, thrive in the tides and change their surroundings for the better.

Tianjin resident Li Lingyan, who visited the park on Monday, was fascinated by the mangrove exhibition.

"Looking at the exhibit, it is as though I was brought to the seashore to see how mangroves grow in a tough environment. It was an amazing process," she said.

" I was totally thrilled, and I got to learn a lot about mangroves."

Near Gate No 5 of the park, "a forest of lights and shadows" draws crowds.

Using a variety of advanced technologies-augmented reality, artificial intelligence, virtual reality and human-computer interaction-scenes are created based on ancient Chinese classics, such as the Classic of Mountains and Seas, in which mythical animals appear in forests, lightning flashes, thunder rumbles, wind blows and rain pours.

Visitors can experience primeval nature in a part of the exhibition developed by the Beijing World Horticultural Expo Coordination Bureau and the Chinese Academy of Sciences' Institute of Automation.

In addition, visitors can experience what it's like to ride in an autonomous vehicle. Three driverless vehicles developed by Baidu-two with eight seats and one with four seats-offer rides in the park.