TECH Huawei expands 5G footprint in Europe despite US crackdown

Huawei expands 5G footprint in Europe despite US crackdown 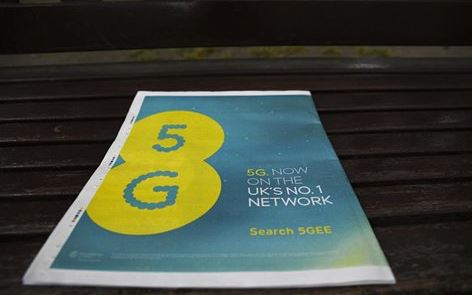 An EE advertisement appears on a newspaper on the day the mobile network operator has officially launched the 5G service in London, Britain, May 30, 2019. (Photo: Xinhua)

Huawei has not played down its 5G ambitions as it continues pushing forward its deployment of 5G technologies not only in the Chinese market but overseas as well, as it launched the first 5G service in the UK while eyeing closer collaboration with other European countries. A BBC morning show was aired on Thursday over a 5G network supported by Huawei equipment, the first of its kind in the UK. After South Korea and the US, the UK has become the third country in the world to achieve 5G commercial use, as its major carrier EE launched 5G mobile services in, among other places, London, Cardiff, Edinburg and Belfast.In collaboration with Huawei, EE provides a network speed from 100 to 150 megabits per second (Mbps), according to a document seen by the Global Times on Friday. About 450,000 users registered to upgrade their network services to 5G, and many of them lined up Thursday morning in front of the carrier's shop in London to have a test of the next generation of wireless technologies. Huawei has been a key partner of UK networks as they bring their 5G services to the market, from an infrastructure and devices perspective, Ben Wood, UK-based mobile and wireless industry analyst at CCS Insight, told the Global Times on Friday. "Not being able to sell Huawei smartphone is frustrating, but any ban on using Huawei infrastructure would be a major blow to the speed with which 5G can be rolled out in the UK," he said. The US clampdown on Huawei has been weighing on its smartphone business, as Google restricted part of its Android license to the Chinese firm. However, Huawei has not been intimidated by the cut-off from US companies, which also disrupted the global supply chain. While Washington has been repeatedly lobbying European countries, urging them to reject Huawei equipment for so-called national security reasons, many countries have ignored the US while continuing to allow Huawei to bid and roll out core parts of network infrastructure. Some European countries consider China more reliable than the US in terms of doing business, seeking closer cooperation with the second-largest economy in the world. For instance, China was ranked third behind Germany and France, according to a survey which focused on political and economic conditions affecting international trade by Frankfurt-based Commerzbank, media reported. And China has outperformed the US as a trustworthy trade partner. Among 115 German companies thinking of relocating their production facilities overseas, 31 percent were reportedly thinking about China and nine percent to the US, the survey said. US President Donald Trump is expected to talk about the Huawei issue when he visits the UK next week, threatening to limit intelligence sharing with the British government if it allows Huawei to build 5G networks, Financial Times reported on Friday. "This attempt will eventually end up failing, as carriers and customers know which company could provide better products to achieve their 5G goals," an industry insider surnamed Jiang told the Global Times on Friday. The success of the first 5G service backed by Huawei will be the strongest argument for the UK to continue working with the Chinese company, he said. The Shenzhen-based company will also continue expanding cooperation with European countries, including Russia, as the company has signed agreements with local carriers, a Huawei spokesperson told the Global Times on Friday. Revenues from Europe, Africa and Middle East accounted for 28.4 percent of Huawei's total in 2018, the second-largest contributor after Chinese market.