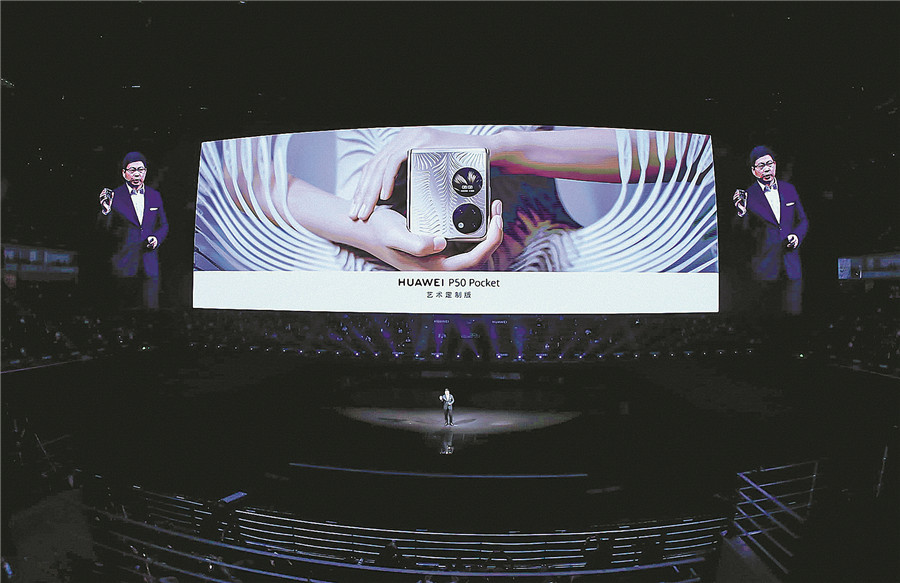 Analysts said the P50 Pocket signifies two aspects. First, Huawei is well on its way to maintain a solid presence in the premium segment despite its recent troubles.

Second, Chinese smartphone makers are focusing on foldable smartphones to wrap up the year of intensified competition in the high-end market.

The P50 Pocket is expected to square up against the Find N that rival Oppo unveiled last week. Smartphone brands such as Xiaomi and Vivo are also rolling up their sleeves in the foldable segment.

Yu Chengdong, CEO of Huawei's consumer business group, said at a product launch event in Shenzhen, Guangdong province, that the P50 Pocket has a vertically foldable display and a pre-installed Harmony-OS operating system, and is a result of three years of efforts.

The number of devices equipped with HarmonyOS has exceeded 220 million units. The internet of things devices from third-party companies that are powered by the HarmonyOS Connect have exceeded 100 million units this year, Yu said.

Data from International Data Corp, another market research provider, showed that in the first quarter of this year, Apple Inc had a 72 percent share of the above-$800 segment in China and Huawei had 24 percent.

Other domestic brands have tried hard but could not quite expand their presence in the premium segment this year due to Apple's dominance, Xiang said.

In October, iPhone sales grew 46 percent month-on-month in China, making it the new largest smartphone brand in the Chinese market for the first time since December 2015, data from Counterpoint Research, another market intelligence firm, showed.

Jene Park, senior analyst at Counterpoint Research, said Apple's anticipated entry into the foldable smartphones segment will likely prove to be an important milestone for the industry.

"Apple is known to be extra cautious on costs and component sourcing. A foldable iPhone is a nod to the robustness of the technology, and we expect this to happen toward end-2022 or most likely 2023," Park said.

Pete Lau, chief product officer of Oppo, said earlier he believes foldable smartphones will evolve from being novelties to necessities.