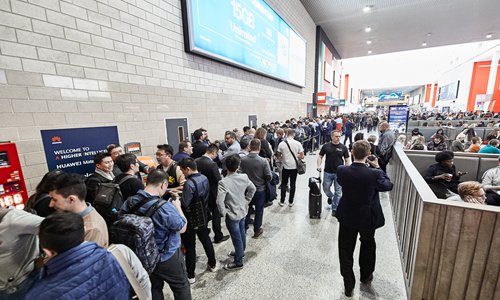 Consumers wait in line to enter the venue where Hauwei launched its Mate 20 series. (Photo: IC)

Chinese telecommunications giant Huawei is expanding into the virtual reality (VR) sector, an industry that is expected to prosper with the coming of the 5G era. It's another move ahead for the company despite lingering uncertainty amid an intensified crackdown by the US.

The company's VR glasses, called HUAWEI VR Glasses, will hit the market on Thursday, with a price of 2,999 yuan ($428.65). The VR glasses were unveiled on October 23. They're only 26.6 centimeters thick and weigh just 166 grams, a huge leap over current VR headsets in terms of lightness.

These qualities helped Huawei win a World VR Industry Conference Innovation Gold Award in 2019, according to the company.

The VR sector has been rapidly picking up over the past year. In the first quarter of 2019, global shipments of augmented reality (AR)/VR headsets increased by 27.2 percent year-on-year, according to an IDC report.

China's AR/VR technology-related investment will reach $5.76 billion in 2020, leading the world in terms of value and accounting for more than 30 percent of the global market, the report said.

The move, which comes amid an US intensified crackdown on Huawei, is also strong proof that the company is still moving steadily forward. Apart from expanding its businesses scope, the technology giant has been diversifying and reducing its reliance on the US over the past year.

Its moves in this area included a self-developed HarmonyOS in a bid to replace Google's Android operating system, and self-developed chips including the Balong and Krin series to replace imports from US suppliers such as Qualcomm.

Huawei has so far secured more than 60 commercial 5G equipment contracts around the world, the company has said.