Huawei Technologies Co has raised its year-end target for self-developed operating system HarmonyOS to 400 million devices from the previous projection of 300 million devices, driven by mounting enthusiasm for the OS from partners and consumers, China Media Group reported. 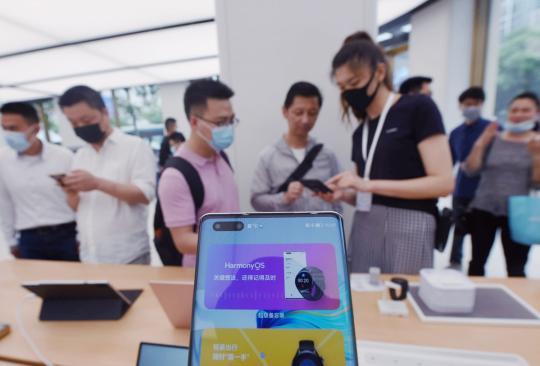 As of Friday, HarmonyOS smartphone users have exceeded 50 million, Huawei said. It launched the latest version of its OS, Harmony-OS 2, in June for the internet of things devices, including smartphones, tablets and smartwatches.

That marked a crucial step for Huawei, which had prepared for its transition from Google's Android operating system to HarmonyOS for a long time after the US government restricted its access to Google software and services in 2019.

At the start of July, Huawei said there were more than 30 million users of HarmonyOS. Stated differently, every second, eight users upgrade the OS of their older models of Huawei smartphones on average, replacing Android with HarmonyOS.

Zhang Wentao, a Beijing-based bank employee who recently upgraded the software of his Mate 30 smartphone to HarmonyOS, said the new OS offers a very smooth experience across his phone and Huawei tablet.

Huawei said earlier it expected the number of devices equipped with HarmonyOS to reach 300 million by the end of this year, including more than 200 million Huawei devices, with the rest coming from third-party companies' equipment.

Huawei expected that more than 40 mainstream brands will become new partners of HarmonyOS by the end of this year.

Yin Dong, a Beijing-based software developer who has been using tools from HarmonyOS to develop mobile applications for months, said he is very optimistic about the operating system's future.

"It is very convenient to develop applications for cross-device experiences based on HarmonyOS, which is designed for IoT devices including watches, TVs, cars and even ovens, and enables them to easily connect with each other and deliver new functions," Yin said.