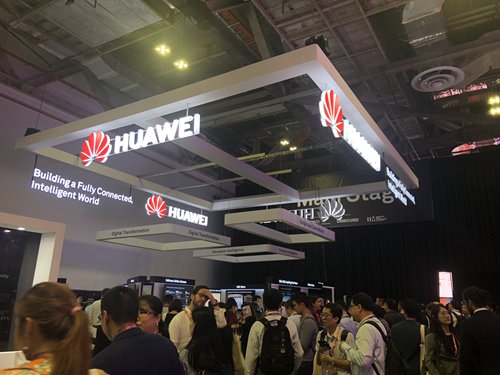 A view of the Huawei stand during the Innovfest Unbound tech show in Singapore.  (Photo: Global Times)

HongMeng, Huawei's alternative operating system (OS) for Android, may be announced at the Huawei Developers Conference in early August, according to a report on news portal yicai.com on Sunday. The OS is likely to build a large ecosystem thanks to a series of measures by Huawei, including the self-developed app compiler, according to experts. Ren Zhengfei, founder of Huawei, observed that despite the fast progress on the OS, the biggest challenge is to cultivate a robust ecosystem, and to encourage as many developers to engage in the system as possible, the report said. However, industry analysts noted that compared with other non-Android and non-IOS systems, HongMeng has a much better chance of surviving and even winning a considerable market share.Xiang Ligang, director-general of the Beijing-based Information Consumption Alliance told the Global Times on Monday that the key is Huawei's independently developed ARK compiler, which allows app developers to convert their apps to be compatible with the HongMeng system."The main reason that most small OS on the mobile end failed, including Windows and Symbian, is that developers don't have enough incentives to develop multiple sets of apps for different OS," Xiang said. "The compiler means the apps can be ready for HongMeng without having to be developed from scratch. And as more apps operate in the system, more developers will have the incentive to engage with it."HongMeng also has a broader application range than most OS. According to the report, the HongMeng OS will be installed not only in smartphones but also in applications for the Internet of Things (IoT), and industrial automation, with less than five milliseconds of processing delay, Ren was quoted as saying.   "Given its focus on processing delay, the HongMeng OS is still largely a system for industrial automation rather than smartphones," said Fu Liang, a Beijing-based independent industry analyst.It is still an emergency backup plan prepared for the worst case scenario. To take over the current dominant OS would be costly and require a new set of negotiations and verification with network providers, Fu said.Currently, the HongMeng OS is being tested at a relatively small scale, but around 1 million devices equipped with HongMeng OS will be shipped before the end of the year, the report said.  "A very likely strategy for Huawei is to select a specific type of phone to have the OS installed to test the waters," Xiang said. "And by trial and error and collating the market response, Huawei will have a better idea how to update the system."