WASHINGTON, March 25 (Xinhua) -- The Hubble Space Telescope has for the first time captured how a giant storm on Neptune took shape, giving scientists insights to the inner workings of the poorly-understood ice giant planets. 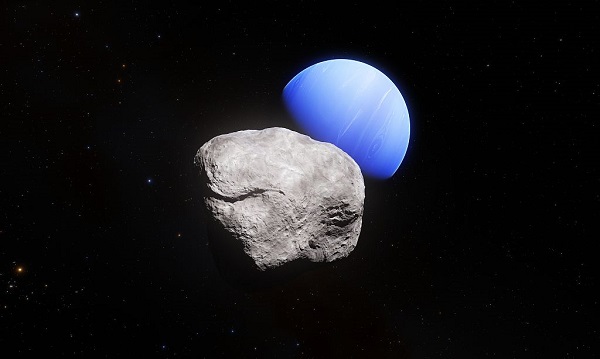 The study published on Monday in the journal Geophysical Research Letters showed that one of Neptune's Great Dark Spots or giant storms originated much deeper in the planet's atmosphere than previously thought.

The American planetary scientists were analyzing Hubble images of a smaller dark spot that appeared in 2015 when they discovered small, bright white clouds in the region where the 2018 Great Dark Spot would later appear.

The high-altitude clouds are made up of methane ice crystals, showing bright white color. Scientists reckoned that the methane clouds accompanied the dark storms by hovering above them just like lenticular clouds capping tall mountains on Earth.

Computer models of Neptune's atmosphere showed that the deeper the storm, the brighter its companion clouds.

In another study published on Monday in the Astronomical Journal, the scientists said new storms would crop up on Neptune every four to six years and each may last up to six years, but two-year lifespans are more likely.

"We have never directly measured winds within Neptune's dark vortices, but we estimate the wind speeds are in the ballpark of 100 meters per second, quite similar to wind speeds within Jupiter's Great Red Spot," said Michael Wong, a planetary scientist at the University of California, Berkeley.

They also found that the Neptunian winds slowly drifted across latitudes. That is unlike Great Red Spot on the Jupiter which kept almost still in latitude for at least 350 years.

The new findings have implications for studying exoplanets of similar size and composition.

"If you study the exoplanets and you want to understand how they work, you really need to understand our planets first," said Amy Simon, a planetary scientist at NASA's Goddard Space Flight Center.

A total of six storm systems have been spotted since scientists first set their sights on Neptune. NASA's spacecraft Voyager 2 identified two storms in 1989. Since Hubble launched in 1990, it has viewed four more of these storms.