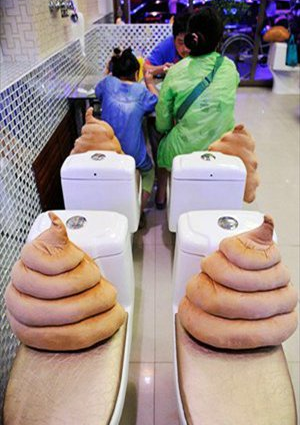 A toilet and feces-themed restaurant lift its lid for the first time in Taiyuan, Shanxi Province. (Photo: GT)

Human feces might be used to cure depression, according to Chinese scientists, who accidentally discovered the relationship between intestinal floras and depression.
Yao Honghong, a professor with the school of medicine at Southeast University in Nanjing, East China's Jiangsu Province, discovered accidentally during an experiment that mice without depression genes have different intestinal floras from depressed mice.
The team then collected feces from mice without depression and gave it to the depressed mice, whose depression symptoms apparently eased after that.
Yao told the Global Times on Monday that they are planning to develop oral medicines containing intestinal floras of healthy people. The team is now collecting intestinal floras from healthy people who volunteer to donate their feces.
Depression is an emotional disorder. Present antidepressants have some problems such as working slowly and patients can have many adverse reactions after taking them, the Yangtze Evening Post reported on Saturday.
The report said that the efficiency and safety of using intestinal floras to treat depression is higher than for present medicines.
The discovery has gone viral on Chinese social media, being both doubted and hailed by netizens. The topic "Human feces may cure depression" has been viewed more than 100 million times as of press time.
Some Chinese netizens said that they would refuse this kind of therapy. "If I have depression, I might not accept therapy related to feces. It is a little disgusting," one of the netizens commented.
Other netizens said that the therapy does have a scientific basis and hope it can be used in clinics soon to help those who have depression.
"Intestinal floras can influence human health and some of them are related to depression. Feces are only one of the sources of these floras," said one netizen who also researched intestinal floras.