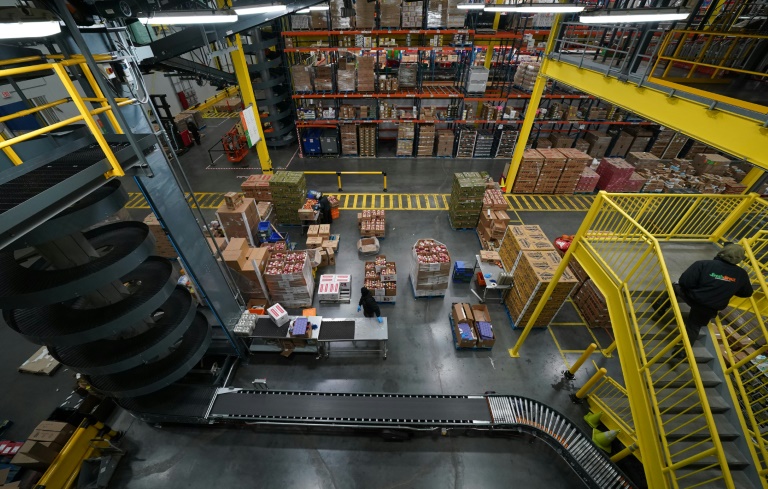 In New York, a city famous for always being on the go, grocery shopping can be time consuming.

But grocery company FreshDirect promises to deliver within mere hours fruit, fish and bottles of water ordered online, and it relies on its high-tech Bronx warehouse to keep up with demand.

Orders ramping up ahead of Thanksgiving when families across the United States gather around the table for a huge feast. Everything at the FreshDirect depot is as well-regulated as a Swiss clock, thanks to the computer system.

On the ground, employees manage palettes, scan labels, and sort products. But above their heads, huge orange and green plastic bins -- the company's signature colors -- seem to have a life of their own.

They zip along on conveyor belts that spiral up to the ceiling, carrying the bins through countless levels of shelves.

As soon as a customer starts placing a FreshDirect online order, the system recognizes them.

"The system knows you, where you live, what amount of groceries you usually buy, what truck it will fit on, and based on that, what time can be offered," explained Timothy Knoll, the chief operating officer.

Orders are grouped by destination, and the boxes can then be sent out.

The conveyor belts run for almost nine miles (15 kilometers), criss-crossing the 400,000 square foot (37,000 square meter) depot. But their layout was designed to limit bins' trips, which last between 25 to 30 minutes on average.

For small products, robots will pick them out one by one from the massive shelving units and bring them to one of six packing stations.

Once there, employees scan them, package them and put them in boxes that are quickly sent on their way with the touch of a big red button.

Bottles of water, the most popular item, are stored near the conveyor belts.

For fruits and vegetables, employees can see which products have been requested on tablets and employees set aside any that are damaged.

In a refrigerated room, other workers cut the fish of the day, still soft in their boxes of ice.

"About 90 percent of our fresh connections are... with the farmers and the people that actually grow and raise our food," said Scott Crawford, the chief merchandising officer. This allows FreshDirect to eliminate middlemen and save time.

"You can order a pound of codfish seven days from now, that fish is still swimming in the ocean for another four or five days before we actually have it in-house," said Knoll.

In order to accurately predict supply and avoid waste, "we are confident with our vendors, and we're comfortable with how we handle things in the building to control the inventory," he added.

Each item has a barcode denoting the type of product, where it came from and its expiration date.

FreshDirect also relies on 20 years of data accumulated since its launch in 1999. The company knows how to anticipate consumer habits as accurately as traffic patterns, including by accounting for weather conditions.

The company is not as prevalent as it has been in New York, but it still dominates: FreshDirect makes 68 percent of the grocery delivery market in the Big Apple, well ahead of Instacart (13 percent), Peapod (nine percent) and Amazon Fresh (nine percent), according to the data analysis firm Earnest Research.

Sales slumped slightly just after the Bronx depot opened in the summer of 2018. As the system worked out any kinks, customers complained of incomplete or late orders.

FreshDirect has regained some ground since then.

The company, which has offered same-day delivery since March, said that online business "continues to grow, and we are operating better than ever before."

"An online grocer's biggest enemy is not Amazon -- it's itself," said Paula Rosenblum, a retail technology analyst for RSR Research.

"There is clearly a market. There is just no clear path to profitability," she added, noting that sales margins for groceries are generally "pretty low."

FreshDirect has not released specific figures, saying only that they have "thousands of orders daily."

In any case, the company has already seen multiple economic cycles -- the average size of a Thanksgiving turkey varies in relation to economic growth -- and various consumer habits.

"Maybe 15 years ago, you would see more frozen fruits and vegetables being sold for the holiday," said merchandising chief Crawford.

But now "people want to have that fresh broccoli and those fresh brussel sprouts."

"If you don't get it right in New York City," Crawford added, "you won't be doing it long."