TECH In smartphones, pandemic may have met its match

In smartphones, pandemic may have met its match 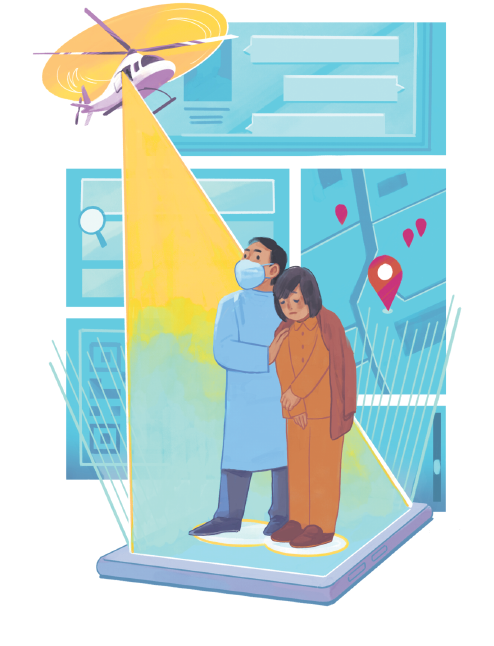 Each night thousands of people are helping the search for COVID-19 treatments while they sleep. Just before bed, these citizen scientists put their phones on charge and open an app, connecting to a vast supercomputing network that mines internet databases for drug and food molecules that have the potential to disrupt or destroy the novel coronavirus.

DreamLab is one of many disease-fighting smartphone applications that existed before the current global pandemic.

The app, developed by the Vodafone Foundation and originally programmed to search for cures for cancer, has now been repurposed to combat COVID-19.

The same is true for several other smartphone innovations that are now collectively training their sights on this new threat.

Drawing on previous research into the automated detection of asthma and chronic obstructive pulmonary disease, engineers in Britain have developed the COVID-19 Sounds App that aims to detect infection through the sound of coughing and breathing.

Lessons learned from symptom tracking apps dedicated to monitoring the progress of degenerative diseases have been useful in the development of COVID-19 smartphone programs that collect information on how the disease manifests itself in infected people.

And public health officials who led experimental app-driven contact tracing projects in West Africa during the 2014-16 Ebola epidemic have seen their methods proliferate to an extraordinary extent across the globe.

About half of the countries in the European Union have now set up some form of contact tracing, following on from early adopters of such measures in Asia, including South Korea and China.

In this once-in-a-century pandemic, the smartphone has emerged as a powerful tool for public health authorities.

But since privacy law and regulations differ from country to country, it is hard to know whether such digital health apps will be effective and if so where.

Contact tracing, as defined by the World Health Organization, involves identifying those who have a disease, listing those who have come into contact with that person, and monitoring and following up with those individuals.

Contact tracing has been imperative in the eradication or control of endemic diseases such as smallpox, though health authorities say best practices still need to be ironed out to effectively apply methods during the chaotic periods that follow the outbreak of emergent pathogens.

In Europe, the European Commission has called for a common approach to the use of mobile apps and mobile data to support contact tracing efforts.

At its core, this approach will need to both uphold regulations and recognize that these are extraordinary times, said Costica Dumbrava, a social scientist who wrote a report on mobile tracking and novel coronavirus for the European Parliamentary Research Service.

"While governments may be justified in limiting certain fundamental rights and freedoms in order to take effective steps to fight the epidemic, such exceptional and temporary measures need to comply with applicable fundamental rights standards and EU rules on data protection and privacy," Dumbrava said.

In South Korea, widely lauded for its management of the pandemic, contact tracing apps were used to good effect. The apps existed within a wider monitoring system that included high levels of testing and analysis of pharmacy visits, credit card transactions and surveillance camera footage. This was all made possible as the country had adjusted laws pertaining to the information on those with infectious diseases following the MERS outbreak in 2015.

Most European countries are employing or considering apps that use anonymized and aggregated location data for tracking people who are at risk.

A report last month by researchers at the University of Oxford said manual contact tracing is too slow to reach people before they transmit the disease, whereas the scalability and speed of a digital approach, using proximity sensors of smartphone devices, was theoretically fast enough to stop the epidemic in Britain.

"One element of the approach adopted by China and several other countries in East and Southeast Asia that has been highly successful in reducing cases is the use of mobile phone data combined with intensive testing programs," Oxford University researchers wrote in a separate paper last month. "There is evidence to suggest that the use of this kind of approach might be successfully transferable to other settings with different political and cultural systems."

The NHSX, which is the technology arm of the UK National Health Service, has confirmed it will work in conjunction with Apple and Google on a Bluetooth-powered contact tracing app that will alert users if they come into contact with someone who has tested positive for COVID-19.

Apps that use GPS location information are good at tracking the general movement of populations, which can help authorities in determining the efficacy of social distancing measures. Spain, for example, plans to use location data to monitor adherence to lockdown in the country.

Bluetooth and Wi-Fi are better at keeping tabs on individuals in close-quarters, making them preferable to GPS for contact tracing apps.

Apple and Google plan to unveil their COVID-19 contact tracing technology this month, and they have confirmed they will collaborate with governments and health agencies on the development of apps.

The companies have also said they support a decentralized system, so governments will not be allowed to store user information in a centralized server. Apple and Google will place several other limits on how health authorities can gain access to data, to ensure anonymity.

In Europe, two coalitions of privacy researchers and communications experts－the Pan-European Privacy-Preserving Proximity Tracing project, or PEPP-PT, and the Decentralized Privacy-Preserving Proximity Tracing initiative, or DP-3T－are at odds over what approach governments should take in order to create effective and secure contact tracing systems.

The PEPP-PT has developed a COVID-19 contact tracing solution that sends data to servers, while the DP-3T has created a decentralized protocol that preserves calculations on user handsets.

Some European countries, including France and Germany, are developing protocols aligned with the PEPP-PT model, which could mean that apps are less functional for Apple and Android users.

Another issue of concern is uptake of the apps. Most European countries with a contact tracing protocol have opted for non-compulsory apps. Only Poland has made a COVID-19 app mandatory for those who have tested positive for the virus or are likely to be infected.

In March, Singapore introduced TraceTogether, a non-compulsory app that uses a centralized system. About 19 percent of the population has downloaded the app, and the country's National Development Minister has called on more people to use the tool.

Analysts at the open-source contact tracing project COVID-Watch in California estimate that between 50 and 70 percent of a population needs to use a contact tracing app for it to be effective.

Simulations that Oxford University researchers ran last month revealed that using the PEPP-PT model in Britain the epidemic could be suppressed if 80 percent of all smartphone owners (excluding those under the age of 10), or 56 percent of the overall population, frequently run the app.

The study found that low rates of use of the app resulted in a resurgence of the epidemic and the need for further lockdowns.

"The scale of the suffering caused by the COVID-19 pandemic means that if a case can be made that an intervention requiring some degree of privacy infringement will save significant numbers of lives and reduce suffering, this may be justified," said a paper last month co-authored by Michael Parker, director of the Oxford University Wellcome Centre for Ethics and Humanities.

Smartphones are being used to combat the pandemic in other areas where privacy and rights concerns are less pronounced, including technology that looks to discover possible treatments or generate data on symptoms.

Initial results published last month by the British designers of the COVID Symptom Tracker app suggest that losing sensitivity in taste and smell is a more strongly predictive symptom of COVID-19 infection than fever.

The COVID Symptom Tracker was developed by researchers at King's College London and unveiled in late March when 1.5 million people downloaded the app. Of these, 1,702 people reported having been tested for COVID-19, with 579 positive results.

The data analyzed from the app shows that 59 percent of COVID-19 positive patients reported loss of smell and taste, compared with only 18 percent of those who tested negative for the disease. According to the researchers, these results were much stronger in predicting a positive COVID-19 diagnosis than self-reported fever.

When applied to the approximately 400,000 individuals reporting symptoms who had not been tested for COVID-19, the team found that almost 13 percent of these people are likely to have been infected by the virus.

This means an extra 50,000 individuals are likely to have as yet unconfirmed COVID-19 infections, said the King's College team, which partnered with Guy's and St Thomas' NHS Foundation Trust, the National Institute for Health Research's Biomedical Research Centre and a healthcare startup, ZOE Global, on the study.

Tim Spector, a genetic epidemiologist who led the research, said those with loss of smell and taste appear to be three times more likely to have contracted COVID-19. Those with these symptoms should, therefore, self-isolate for seven days to reduce the spread of the disease, he said.

"This urgent research is only possible thanks to the 1.8 million citizen scientists logging their symptoms every day," Spector said, indicating that more people have downloaded the app since the initial research phase. "This also gives us an evolving map of the UK of where symptoms are occurring two to three weeks before a strain on the NHS, which is why it's vital to continue logging your health and symptoms, even when you feel completely healthy, and encourage others to use the app."

Another app, developed by Cambridge University scientists, aims to detect COVID-19 infection based on the sound of coughing, breathing and even speech.

Cecilia Mascolo, a professor at Cambridge's Department of Computer Science and Technology, who leads the project, said the team was encouraged to develop the COVID-19 Sounds App after doctors reported that some patients with the virus catch their breath when speaking, develop a distinctive cough, and display disrupted breathing patterns.

The team is now looking to gather a large, crowdsourced data set to feed into its machine-learning technology.

Similarly, developers of Dream-Lab are asking their users to consider temporarily running the new COVID-19 program in the app, which was initially designed to aid in cancer research and has over 100,000 downloads on Google Play.

The Vodafone Foundation, which developed DreamLab, has worked with Imperial College London on the new Corona-AI project, which uses the power of a supercomputing network of smartphones to discover potential cures for COVID-19 in existing databases of drug and food molecules.

A single desktop computer would take decades to crunch the data, but this computational time is greatly reduced if a program spreads the calculating burden across multiple devices, said Kirill Veselkov of the Department of Surgery and Cancer at Imperial College London, who is leading the research.

Existing drugs and foods may have the potential to help treat COVID-19 patients before a vaccine is created, Veselkov said. And any region with high ownership of smartphones provides the right conditions to run the millions of calculations and experimental simulations needed to swiftly uncover potential life-saving molecules.