Indian netizens have found a new target at which to vent to their anti-China sentiment despite the spreading coronavirus in the country. By loading a mobile app called "Remove China Apps," the software is reportedly able to delete Chinese-developed apps from Indians' smartphones.
The software, developed by Indian startup OneTouch AppLabs, has seen some 1 million downloads in the two weeks since its launch in the Google Play Store on May 17, becoming the No.2 app downloads.
With a simple interface, the software helps users identify apps developed by Chinese firms by pressing a "scan" button and delete all relevant apps, including SHAREit, a cross platform sharing tool; UC Browser, a Chinese web browser owned by Alibaba; and China's cross-border e-commerce platform Club Factory.
The app went viral as Indians shared it on Twitter and recommended it to others. Indian actor Arshad Warsi, who has 2.2 million Twitter followers, joined in, saying in a tweet posted on Saturday: "I am consciously going to stop using everything that is Chinese. As they are a part of most of the things we use, it will take time."
The Passage, a Chinese media outlet focusing on India, said the anti-China software might have been developed by an Indian engineer who had worked at a Chinese firm and was later fired during the Covid-19 pandemic. 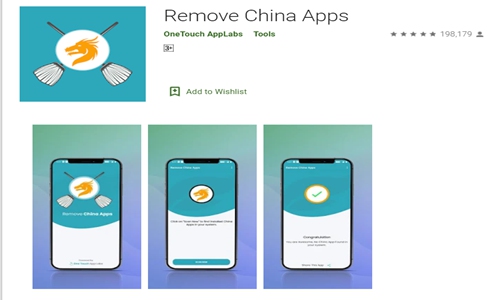 OneTouch AppLabs had not responded to an email inquiry from the Global Times by press time.
The engineer is obviously cashing in on the anti-China sentiment, and his software is deemed as harmful for China-India relations that have recently been tested by rising border tensions.
If the Indian government allows the irrational anti-China sentiment to continue ruining bilateral relations, it is likely to draw tit-for-tat punishment from Beijing, an industry source who asked to remain anonymous told the Global Times on Tuesday.
The software has drawn ridicule from Chinese netizens, who suggest Indians could "throw away" their Chinese-branded smartphones.
Indian netizen Tariq Malik tweeted, "On my OnePlus (Chinese smartphone), 8 China apps were deleted."
Four of the top five smartphone brands in the Indian market are from China, with Xiaomi leading the market with a 30 percent share in terms of shipments in the first quarter of 2020, data from market research firm Counterpoint Research showed. In India's premium smartphone market, OnePlus remained the No.1 brand in 2019.
Liu Dingding, a Beijing-based independent analyst, told the Global Times on Tuesday that this Indian sentiment won't affect Chinese firms' operations in the South Asian country and the "Made in India" initiative can't survive without the power of Chinese manufacturing.
"From a pragmatic perspective, fanning such sentiment will do no good for India's own industrial development as it needs economic and trade ties with China," Liu noted.
The Google Play Store, which approved the anti-China app, is also accountable. "It seemingly reflects the double standards of Western firms," said Liu.
Fu Sheng, chairman and CEO of Chinese mobile app company Cheetah Mobile Inc, posted on his social media account on Monday, "How could the app be put in the store? Doesn't it violate Google's policy?"
Earlier this year, Google removed close to 600 Android apps and banned their developers from its Play Store and ad networks as it cracked down on ad fraud and "disruptive" mobile ads. Cheetah Mobile had more than 40 of its apps yanked from the Play Store in the wave, according to BuzzFeed News