Information technology or IT remains the most popular career option for fresh graduates in China as relatively higher salaries, large number of jobs available and bright prospects in the sector trump the low mood created by recent layoffs, according to an industry report. 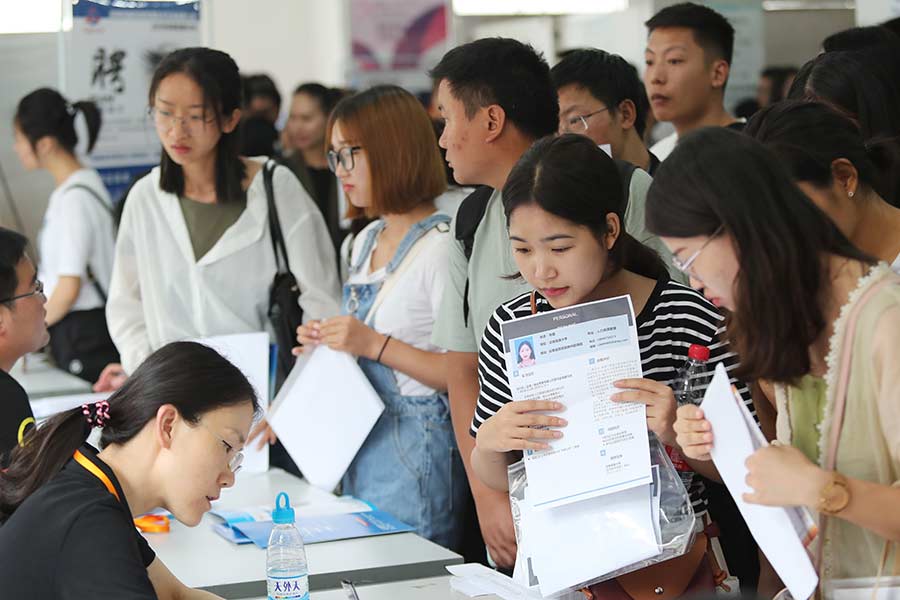 Published by 58, a life services platform, the report showed 16.6 percent of fresh graduates surveyed received job offers or hoped to work in the IT sector.

The IT sector encompasses technical jobs in the areas of computers, internet and telecommunications.

Also, such IT-related jobs often provide higher compensation, comfortable work environment and broader space for personal development. The occupation is considered the icing on the cake among college students who newly enter the work force, she said.

That is interesting because this year saw some internet companies in China cutting jobs, which spread fears that such layoffs could become the industry rule rather than the exception, experts said.

Charlie Liu, IT practice leader and partner of global executive search firm Heidrick & Struggles in China, said despite the layoffs, the internet sector still has much vitality as it leads all industries in innovation. This, he said, keeps demand for more talent strong.

"It's natural that some companies lay off some staff or experience a slowdown in hiring, profit growth and business expansion when the industry sees rapid development," he said. "But the fact is, competition among IT companies for top talent is very fierce."

According to a report in May on Zhaopin, a Chinese online recruitment services provider, the China Institute for Employment Research (CIER) index－a measure of the degree of supply-demand tension in the labor market－of the internet industry was at 2.54 from February to May, a peak season for job-hunting after Spring Festival, down from 3.35 in the same period last year, which indicates that students graduated this year have less job opportunities in the internet industry.

However, based on the data of 88,150 graduates this year, Zhaopin found the internet industry still attracts most job-seekers, thanks to the perception that it offers high salaries and good corporate culture.

However, Li Qiang, executive vice-president of Zhaopin, said some graduates tend to chase hot career options blindly, without rational decision-making, so they end up in certain segments that are not really career-boosters.

"Universities and similar institutions must provide career guidance to students and encourage them to find opportunities in other fields as well, in tune with their aptitude and demand for talent in industries of the real economy," he said.

Fresh graduates in China hit an all-time high of 8.34 million this June, 140,000 more than that in 2018. About 88 percent of interviewees of Zhaopin said they experienced difficulty in their job-hunt, up 5.3 percentage points year-on-year.

Liu from Heidrick & Struggles suggested that students should also develop soft skills like communication, ability to make presentations and team spirit, and not just be content with knowledge and skills they pick up as part of their formal education. Internships could help in this context, he said.

According to Zhaopin's report, 57.66 percent of the interviewees who already received job offers agreed that internships helped them land their jobs. "A clear career target" and "rich social experiences "also contributed to their success.

Li from Zhaopin said since demand for human resources with diverse skills and cross-industry knowledge will only increase going forward, graduates will likely have more chances of finding a job, though such jobs may not necessarily be related to the majors they studied at university.

The 58 report showed that up to 93 percent of graduates surveyed are agreeable to working overtime, showing their enthusiasm and strong motivation in the first job.