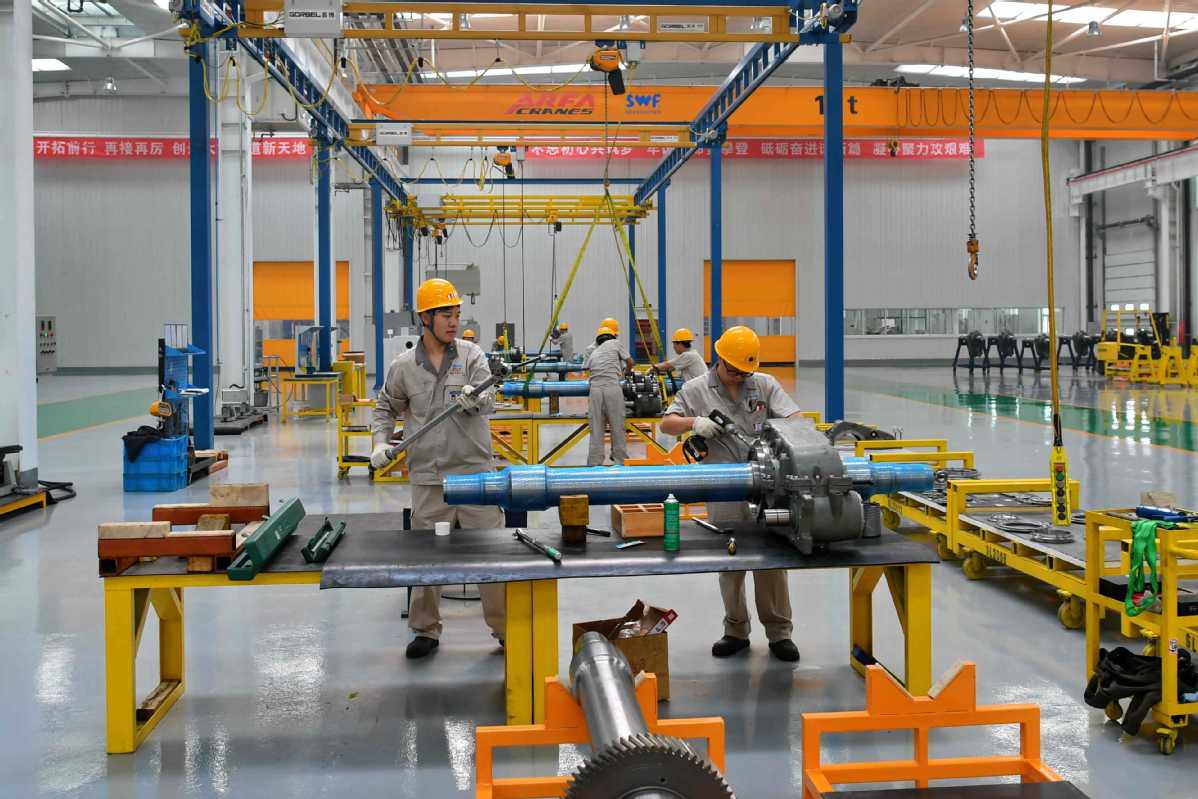 Chinese industry has been following the path of technological innovation and opening-up for decades and will undergo even deeper and wider upgrades in the years to come, experts said.

The nation is now spearheading efforts to marry artificial intelligence with 5G for industrial applications, thus injecting new vitality into its sprawling real economy, they said.

Miao Wei, minister of industry and information technology, the country's top industry regulator, said that 70 years ago China could only make basics like tables, teacups and flour. It could not make cars, airplanes, tanks or even tractors.

But now China has emerged as the only country in the world that ticks all the industrial category boxes under the United Nations' International Standard Industrial Classification. Boasting 41 industrial divisions, 207 groups and 666 classes of products and services, it has built up a modern industrial system and evolved into a global manufacturing juggernaut.

Currently, in each passing minute, China produces about 1,770 tons of crude steel, mines 7,000 tons of raw coal and ships more than 50 cars, 160 refrigerators, 460 air conditioners and 590 computers out of its countless factories.

In 2018, the country's industrial output topped 30 trillion yuan ($4.2 trillion), a dramatic shift from the 12 billion yuan output in 1952, data from the ministry showed.

"It's a miracle in human history that China has gone through industrialization in seven decades. In comparison, the process has taken developed countries hundreds of years," Miao said.

More importantly, with rising spending on research and development, Chinese enterprises have also made a string of breakthroughs in key technologies. For instance, China has unveiled the Jiaolong, its deep-sea manned submersible. The country also debuted its domestically built large passenger jet C919 and China has produced its most powerful supercomputer Sunway TaihuLight powered by domestically developed chips.

"Enterprises have made constant strides in improving their technological innovation capabilities that have become the fundamental driving force for sustainable development in China," Miao added.

The country has evolved from a follower into a global pioneer in a wide range of sectors including telecom, power generation and transmission equipment as well as high-speed railways, he said.

Official data show that China has so far contributed the largest number of patents essential to 5G standards in the world. The progress came after the country's mobile service subscribers hit 1.57 billion in 2018.

Qin Hailin, a senior industrial economy researcher at the China Center for Information Industry Development, said despite current challenges facing China's industrial economy, the country has sound manufacturing fundamentals and the government has made it clear that it will not scale back efforts to achieve industrial restructuring.

"The manufacturing sector is at a crucial stage amid an uphill battle and its growth will slow down to some extent. But as China cultivates innovation-driven growth, its real economy will become increasingly intertwined with the virtual economy and will move forward in a solid and sound fashion," Qin said.

In 2018, the market size of China's digital economy hit 31 trillion yuan, second only to the US.

Qu Xianming, an expert at the National Manufacturing Strategy Advisory Committee, said that as China pushes in-depth synergy of technological advances with economic and social development, innovation will contribute to an increasingly large part of the real economy.

"Industrial growth will benefit considerably from the strategy, which can motivate the long-predicted convergence of IT and other industries to boost momentum in China," Qu said.

A case in point is that Chinese tech companies are teaming up with a variety of industries — agriculture, automobile and healthcare — to explore possibilities of combining 5G and AI to revolutionize traditional sectors of the economy.

From conducting the world's first 5G-enabled brain surgery on a human, transmitting 8K ultra-high-definition TV content through 5G networks and piloting self-driving buses and cars, China is pioneering cutting-edge technologies for commercial use.

Yang Kun, an expert at the China Academy of Information and Communications Technology — a Beijing-based research institute — said 5G enables data transfers at speeds at least 10 times faster than 4G, so it is possible to gather high-quality data quickly, which is necessary to ensure effective AI operations.

"AI applications have existed before the commercial use of 5G, but it is the superfast speed, gigantic computing capacity and massive device connectivity of 5G that will spawn the use of AI in more sectors and on a far larger scale," Yang said.

"China, as one of the world's largest IT and industrial markets, has an unrivaled edge in smart manufacturing," Yang added.