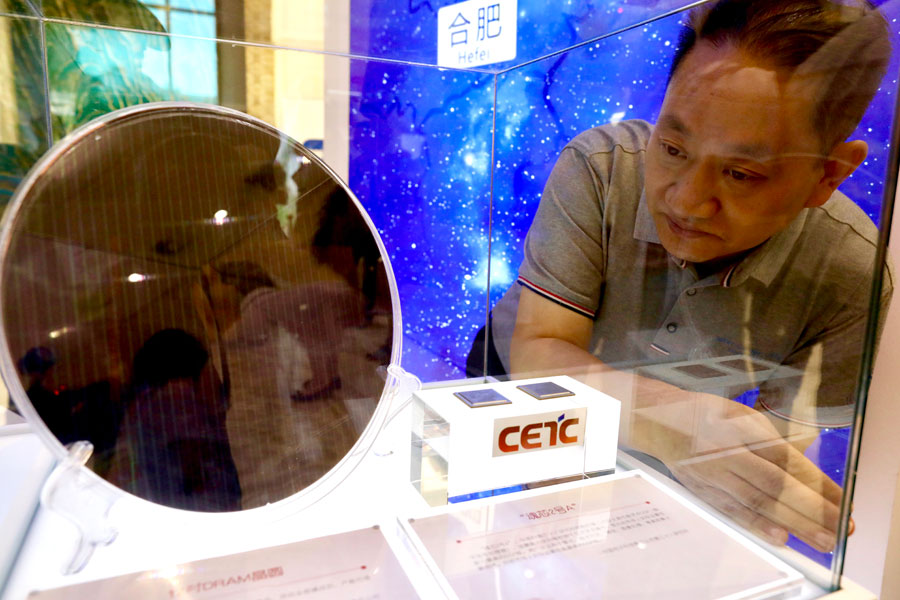 A visitor looks at the "Soul core II A" processor chips developed in China and a silicon wafer at an exhibition showing the reform and innovation efforts of Anhui province in Beijing on Wednesday. (Photo: China Daily)

Innovation has become one of the biggest advantages for Anhui province in its efforts to boost its industrial projects and high-quality development, the province's top official said on Wednesday.

Li Jinbin, Party secretary of Anhui, said the province has undergone some "historic changes" over the past decades, transforming from a major agricultural area to an innovation hub by focusing on its strength in basic research and undertaking major technological projects.

"Anhui's regional innovation capability has been in the top tier nationwide for seven consecutive years," Li said at a news conference held by the State Council Information Office in Beijing.

Anhui has made some groundbreaking scientific achievements over the past few years. Home to the University of Science and Technology of China, the province gave birth to the world's first quantum satellite, nicknamed Micius, and the Beijing-Shanghai Trunk Line, the world's first and longest quantum communication network.

It has also established some major scientific facilities, including the Experimental Advanced Superconducting Tokamak, dubbed "artificial sun", to mimic the energy-generating process of the sun; Synchrotron Radiation Light Source, a powerful source of bright X-rays; and China's Steady High Magnetic Field Facility that supports the country's research on physical science and life sciences.

In 2016, Anhui and the Chinese Academy of Sciences jointly established several institutes that are specially dedicated to research on energy, artificial intelligence and quantum information and technology. The institute of quantum technology also brings together the research resources from some top academic forces including the academy, as well as Tsinghua and Peking universities.

Government figures show the province now has more than 6,000 research institutes, up from around 270 in 1985.

Originally, Anhui was not famous for scientific achievements. The eastern province has long been well-known for mountains, rivers and beautiful rural scenery, and it had relied largely on agriculture as a source of revenue since the founding of the People's Republic of China.

According to the provincial government, agriculture accounted for 75 percent of the provincial GDP in 1952. By 2018, that number had decreased to 8.8 percent.

By integrating the scientific research into these industries, the province was able to improve the manufacturing industry from "low-end" to "high-quality", and bring the scientific achievements from laboratories into the market, he added.

The city of Hefei has 129 companies producing integrated circuits. It is also the world's largest producer of tablet screens and the country's biggest producer of six-axis industrial robots. It is also where iFlytek, a well-known company creating voice recognition software with artificial intelligence, is based.

President Xi Jinping made a trip to Anhui in 2016 and praised the province for its innovation drive.

"Innovation has become one of Anhui's greatest advantages, the shiniest image and the strongest note," Li said.