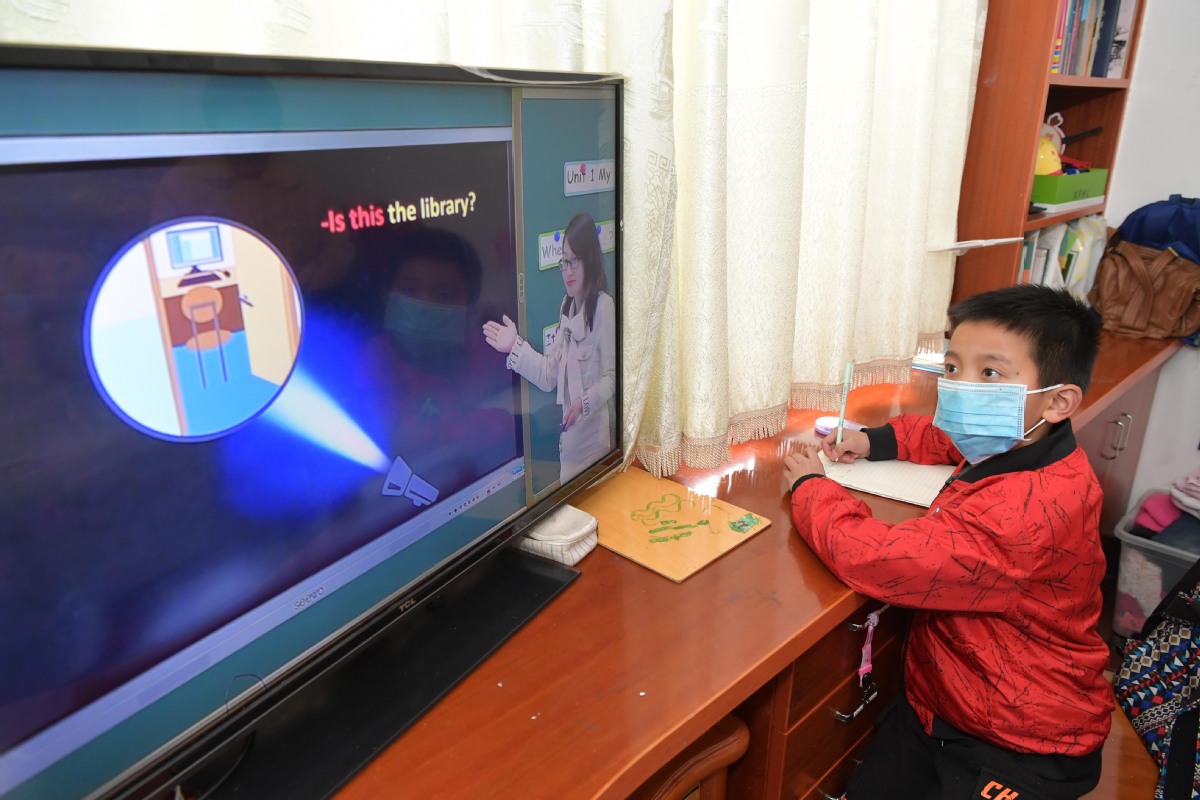 A pupil in Nanchang, Jiangxi province, learns via an online course at home, due to the postponement of school semesters. (Photo: Xinhua)

China's internet television industry is likely to witness robust growth as radio and television companies are beefing up cooperation with local educational authorities and online education companies to offer students livestreaming courses, following the postponement of school semesters due to the novel coronavirus outbreak.

According to industry data, the market scale of the over-the-top or OTT business, which refers to the delivery of audio, video and other media over the internet, will surge from 10 billion yuan ($1.4 billion) in 2018 to 100 billion yuan by 2025.

With the commercial use of 5G technology, the ultra-high-definition video streaming segment will open new growth frontiers in related devices and content production, and further bolster the development of radio and broadcast companies, experts said.

The National Radio and Television Administration has issued guidelines for audiovisual platforms to provide students with online teaching and learning resources during the epidemic prevention and control period.

Beijing Gehua CATV Network has cooperated with the Beijing Municipal Education Commission to roll out high-quality teaching resources and courses.

According to the Beijing-based consultancy AVC, sales of 65-inch and above TVs grew rapidly during the Lunar New Year holiday, with the online retail channel contributing 20.8 percent share, 7 percentage points higher than the same period of last year.

Li Xin, deputy general manager of Beijing All View Technology, a unit of market consultancy firm AVC, said people tend to stay at home as a way to curb the spread of the epidemic, and their willingness to switch on TV sets is on the rise.

"The demand for online educational services is also seeing an explosive growth. Many parents choose large-sized TVs as a tool for children who study at home instead of smartphones and computers that are more harmful to the eyes," Li said, underlining the big screen has been family's entertainment center.

Li is bullish on the prospects of internet TVs, estimating the revenue from internet TV hardware sales and value-added services such as advertisements, gaming, education and e-commerce will surpass 20 billion yuan.

Statistics from GozenData, a big data analysis company which specializes in display terminals, showed the penetration rate of smart TVs in China has reached more than 50 percent, and the figure is expected to reach 80 percent in the next three to five years.

Chinese home appliance manufacturers are pressing ahead with smart TV products that offer interactive scenarios and connect with various smart home devices. Hisense Group launched its social TV with an interactive system for large-screen social viewing in the Chinese market.

Peng Jianfeng, deputy secretary-general of the China Video Industry Association, said the OTT sector will become an important revenue source for TV manufacturers. "The deployment of 5G technology will make the transmission of 8K content possible, as well as boost the development of the internet of things," Peng said.

The total scale of China's ultrahigh-definition video industry is expected to exceed 4 trillion yuan by 2022, according to an action plan issued by the Ministry of Industry and Information Technology, the National Radio and Television Administration, and China Media Group.

Xiao Lirong, an analyst at Huachuang Securities, said more entertainment functions such as karaoke, fitness applications and games should be added to large-sized TVs, giving a big boost to sales.