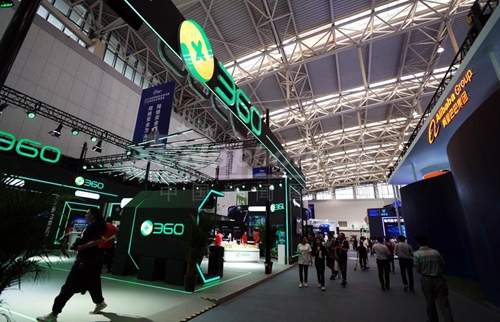 The assassination of top Iranian general Qasem Soleimani by a US airstrike has triggered strong concerns among Chinese cybersecurity experts and netizens over the US "targeted killings" pushing cyber warfare into a new era of unrestricted lawlessness that could one day threaten China.

US unilateral sanctions against Chinese tech giants such as Huawei and ZTE, as well as the Trump administration's militarization of cyberspace increase the likelihood of cyber warfare. Chinese cybersecurity experts suggest that national cyber offensive and defensive test drills could be considered in the face of US hegemony.

They warned that China should be precautious against the idea of setting up an intranet, but instead strengthen international cooperation and make more differences to the global internet community. Cybersecurity experts said this approach can enhance China's role in discourse and connectivity on the World Wide Web and further safeguard its cyber sovereignty.

On December 23, Russia announced it has successfully disconnected its homegrown RuNet from the internet. The new system, which can keep its internal infrastructure working while blocking all inbound and outbound traffic, is reportedly expected to be fully operational in 2021.

It came shortly after the country began enforcing its sovereign internet law allowing Russia to control its internet by creating a national system of domain names. Theoretically, it means that the country's networks could run independently from the rest of the World Wide Web.

Western critics fear the Kremlin attempts to cut Russia from the World Wide Web or shut down connectivity within Russia.

However, many Chinese cyberspace experts believed that the tests did not aim to disconnect from the global internet, but to connect more reliably in the long run.

The tests disrupted US cyberspace hegemony and its likelihood of paralyzing Russia's network infrastructure and strategic offensive abilities by shutting down the internet in extreme cases, Fang Xingdong, founder of Beijing-based technology think tank ChinaLabs, told the Global Times.

It is not a defense measure to stifle the internet, but a tactic to strengthen global network integration so that it will not be used by the US for military and political purposes. It plays a positive role in the stability and security of global cyberspace, Fang said.

The Russian government said its tests were carried out over multiple days involving government agencies, internet service providers, and its own internet companies. The government did not reveal any technical details about the tests and what they exactly consisted of.

The tests were most likely to run on the country's domain name system, said Li Xiaodong, founder of Beijing-based Fuxi Institution, which is dedicated to advancing internet services and research on critical internet infrastructure, and former head of China Internet Network Information Center (CNNIC).

The domain name system is part of the internet's critical infrastructure. A domain name is like mobile contacts on the internet. Internet users can browse websites by making a query on domain names and then accessing the website's IP address.

A root name server is the highest-level domain name system, helping computers connect to the internet or a private network.

Since the US repealed the "net neutrality principle" in 2017, the fear that the US could shut down China's network is growing in China, especially after the Trump administration put Huawei on a trade blacklist in May.

However, Li disagrees with the theory that the US could cut China's international internet access. He deemed that it is unlikely for the country to delete China's domain name and paralyze its network as the root name servers are not controlled by the US government but by multiple independent organizations.

There are 13 root name servers worldwide and 10 of them are in the US. They are operated by 12 organizations in the US, Europe, and Japan, according to the Internet Corporation for Assigned Names and Numbers (ICANN), a California-registered nonprofit public benefit corporation that has set policy for the global domain name system since 1998. It also operates one of the servers.

Li used to work for ICANN. "Any changes to domain name require sophisticated procedures and verifications. The US government cannot simply delete one country's domain system at its will," Li said, noting that China has already made great efforts in improving its domain name system's security and stability.

China has hosted mirror copies (or instances) of root name servers. The global root server system consisted of 1,034 physical instances as of Monday, according to the website of the root-servers.org. It says the Chinese mainland is already home to 10 root server instances.

"After China hosted the root server instances, most of the root server query traffic ran inside the country, which will improve the performance and stability on internet access," Li said.

The root server instance is something like the clone of the root server. Instead of being serviced by a foreign root server, China could resolve domain names like.cn or.com with the instance servers inside China.

In extreme cases, if China is disconnected from the World Wide Web, it will not affect Chinese netizens' inquiries to browse its own websites. With the support of root server instances, Chinese netizens could continue shopping, chatting, watching videos and using payment services online and will not feel any difference with the instances running smoothly.

In August 2019, ICANN announced the authorization of CNNIC to be one of its new emergency back-end registry operators (EBEROs). An EBERO provider is temporarily activated to continue to ensure users' access to the internet if a top-level domain name is at risk.

For many years, Iran has also been working to establish a national intranet to protect its domestic network facilities from cyberattacks. Iran's Supreme Council of the Cultural Revolution announced in May 2019 that Iran's national information network (ININ) - the country's intranet - is 80 percent complete.

In recent years, China has been accelerating the establishment of its own cyberspace, including laws and domestic products, as well as enhancing its cyber sovereignty.

In 2017, China enforced its new cybersecurity law, which is designed to safeguard China's cyberspace sovereignty, national security, public interest, as well as the rights and interests of citizens, legal persons, and other organizations.

Meanwhile, a homegrown version of the root name server system, called the Yeti DNS project, has come under the spotlight with the anticipation of breaking the root server dilemma and achieving multilateral co-governance.

The project, led by China Future Internet Engineering Center, has deployed 25 IPv6 (Internet protocol version 6) root name servers worldwide, among which four have been installed in China, resolving the country's previous predicament of not having a root server, the Xinhua News Agency reported.

Liu Dong, the center's director, told Xinhua that with the increase in the number of internet access devices, the original IPv4 system has been unable to meet demand, and the IPv6 protocol has begun to spread around the world. The center launched the project in 2013 in conjunction with Japanese and US operating agencies and professionals, aiming to set up independently-controlled root server solutions and technology systems based on IPv6.

In recent years, the project has been accused of setting up closed cyberspace, but the project's website notes that Yeti is not providing alternative namespace.

Another project IPv9, dubbed the new generation of internet infrastructure in China, also stirred controversy. The protocol, proposed by the director, Xie Jianping of the Institute of Chemical Engineering located in Shanghai, has attracted public attention with claims of "cyber sovereignty" and "self- control."

Supporters argued that IPv9 is more secure than IPv6 because it allows for network autonomy and control. Opponents said IPv9 is not the internet but a domain name design. If China adopted this approach, it would mean isolating itself from the internet.

After a period of silence, the supporters of IPV9 have made a comeback in recent years. Besides emphasizing autonomy, they have connected the protocol with new trends such as blockchain, digital currency and smart cities. The academic world has called for vigilance against deviation from the concept of an open and innovative internet.

Some voices within China say that the Chinese internet must start anew and set up another non-open and incompatible technologies and standards system; however, the biggest value of the internet lies not in the technology itself, but in its powerful externalities, Fang said.

It is not difficult for a country to build its own network, but if the rest of the world does not adopt it, and the international community cannot interconnect, access and use it, such network is of little value, he said.

Therefore, "we must be vigilant about being self-closing and also being completely open without any defense. China's cybersecurity strategy needs to find the right balance between the two extremes," Fang stressed.

"For a long time, we have been stressing the self-control of core technologies. However, for cyberspace governance, no country could own everything; I think we do not need to persist in whether we have mastered core technologies, but pursue how the technologies which are researched and developed globally by talents in the world could be used by China. The nature is not self-control but self-use," Li said.

"The intranet can only protect the country from the emergency shutdown and guarantee normal internet activities in a short time. However, no country could survive alone for a long time if it is disconnected from the global internet," Li noted.

He stressed that China has benefited from the US and Europe in the development of the internet in China in the past. While grasping autonomy on key internet infrastructure fields, China should always hold the fundamental internet spirit: open and collaborative, and the internet philosophy: rough consensus and running code. Making more contributions to the global internet community is the right way to grasp discourse power and ensure cyber sovereignty.