China's first carbon ion cancer treatment system has been approved by the National Medical Products Administration and is currently installed at the Wuwei Cancer Hospital in Gansu province to provide safer, more effective radiation therapy for the public, scientists said on Thursday. 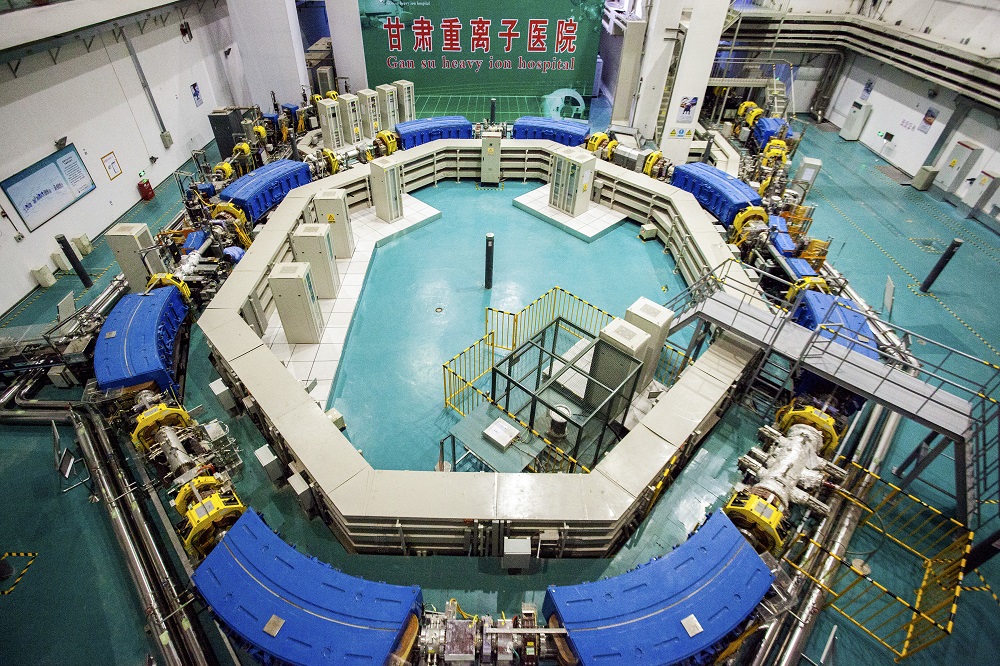 The accelerator of China's first ion cancer treatment system is installed at Wuwei Cancer Hospital in Wuwei, Gansu province. Carbon ions are accelerated to around 70 percent of the speed of light, then blasted at a tumor in beams to destroy its cells' DNA and ultimately kill them. (Photo: China Daily)

The project that led to the creation of the system was launched in 1993 by the Institute of Modern Physics under the Chinese Academy of Sciences and Lanzhou Kejin Taiji Co. The finished product represents a major milestone in China's domestically made advanced medical equipment, said Xiao Guoqing, the project's manager and a researcher from the institute.

First developed by the United States in 1975, the technique of treating cancer with accelerated heavy ions has been viewed globally as the next frontier of cancer treatment, he said. While ions of many elements have been tested, scientists eventually discovered carbon ions are the most suitable in treating tumors and minimizing peripheral tissue damage.

The carbon ion treatment works by accelerating carbon ions to around 70 percent of the speed of light and then blasting these ion beams at a tumor, destroying its cells' DNA and ultimately killing them.

The accelerated ions are more destructive to cancer cells than photons, which are traditionally used in gamma and x-ray radiotherapy, said Wang Xiaohu, vice-president of Gansu Province Cancer Hospital. This makes it possible to deliver a large dose of ions in a small and well-targeted volume tailored to the shape and depth of the tumor. Unlike photons that continue to penetrate and harm the body, the carbon ions will deposit their energy, kill the cancer cells and then stay within the tumor, reducing damage to healthy surrounding tissues and thereby lowering the risk of side effects, Wang said.

Carbon ion therapy can also work on patients whose tumors are too difficult for invasive surgical removal or are unsuitable for typical x-ray treatments, he added.

Given these advantages, Xiao said Germany and Japan have been researching and testing heavy ion therapy since the 1990s. Now, about 30,000 patients have received the treatment at 11 centers in Germany, Japan, Italy and Austria, with more locations under development in France, China, South Korea, Japan and others countries and regions.

Fudan University Cancer Hospital in Shanghai imported a heavy ion acceleration therapy machine from Germany in 2008. Since being launched in 2015, it has treated around 2,000 cancer patients.

Xiao said China has a massive demand for quality cancer treatments. According to the National Cancer Research Center, in 2015 China had around 3.9 million malignant tumor patients, as well as 2.3 million related deaths.

"But most of the advanced medical equipment market in China is monopolized by foreign companies," he said.

Compared to importing expensive medical machines, the domestically made carbon-ion cancer treatment system costs significantly less to build and maintain, thus allowing patients to enjoy cheaper treatments, he said. Similar installations in other parts of the world can run hundreds of millions of US dollars each, while the Chinese version costs about 550 million yuan ($78.5 million).

The average price of heavy ion treatment around the world is 250,000 to 300,000 yuan per course of treatment. The new machine aims to lower it to around 200,000 yuan, and part of the cost might be covered by insurance companies, Xiao said.

So far, the carbon-ion treatment has proved effective in treating early to mid-stage prostate, liver, rectal and lung cancers, and for advanced bone and soft tissue sarcomas. In the first few years, Wuwei Cancer Hospital will treat hundreds of patients per year and aims to gradually increase that number to more than 1,000 per year, he said.

Zhan Wenlong, a noted nuclear physicist and an academician at the Chinese Academy of Sciences, said other Chinese hospitals, including at least one in Hangzhou, Zhejiang province, will also install the equipment in the future.

Scientists are already working on the second and third generation of the machine, which will consist of more advanced superconducting technology to shrink the size of the machine and thus significantly reduce costs while ensuring safety and effectiveness, he added.

"Our instrument's hardware is state of the art, but our software needs to be improved," he said. "Carbon ion treatment should also be implemented in tandem with other treatment methods and drugs. The prospect of this combination of therapy is veryb right."