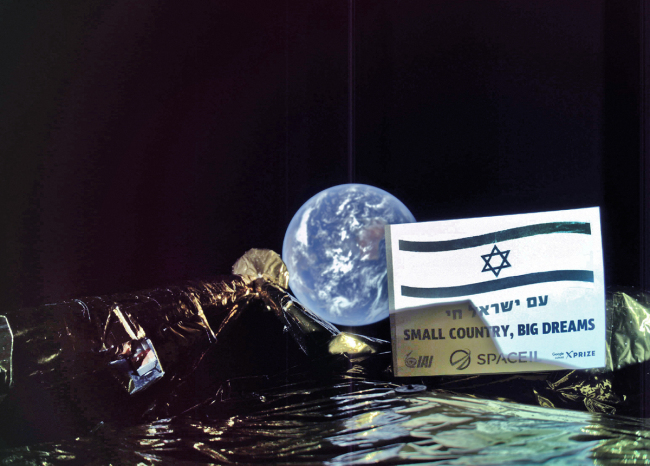 A handout picture released by SpaceIL and Israel Aerospace Industries (IAI) on March 5, 2019, shows a picture taken by the camera of the Israel Beresheet spacecraft, of the Earth during a slow spin of the spacecraft from a distance of 37,600 km (23363.5 miles). The unmanned Beresheet, Hebrew for Genesis, was launched from Cape Canaveral in Florida on February 22 on a seven-week trip to reach the Moon and touch down on April 11.(Photo: AFP)

An Israeli spacecraft on its maiden mission to the moon has sent its first selfie back to Earth, mission chiefs said on Tuesday.

The image showing part of the Beresheet spacecraft with Earth in the background was beamed to mission control in Yehud, Israel -- 37,600 kilometres (23,360 miles) away, the project's lead partners said in a statement.

The partners, NGO SpaceIL and state-owned Israel Aerospace Industries, launched the unmanned Beresheet -- Hebrew for Genesis -- from Cape Canaveral in Florida on February 22.

The 585-kilogram (1,290-pound) craft took off atop a Falcon 9 rocket from the private US-based SpaceX company of entrepreneur Elon Musk.

The trip is scheduled to last seven weeks, with the Beresheet due to touch down on April 11.

The Israeli mission comes amid renewed global interest in the moon, 50 years after American astronauts first walked on its surface.

China's Chang'e-4 made the first-ever soft landing on the far side of the moon on January 3, after a probe sent by Beijing made a lunar landing elsewhere in 2013.

For Israel, the landing itself is the main mission, but the spacecraft also carries a scientific instrument to measure the lunar magnetic field, which will help understanding of the moon's formation.

After China earlier this year, and now Israel, India hopes to become the fifth lunar country in the spring with its Chandrayaan-2 mission. It aims to put a craft with a rover onto the moon's surface to collect data.

Japan plans to send a small lunar lander, called SLIM, to study a volcanic area around 2020-2021.

As for the Americans, who have not been back to the moon since 1972, a return is now the official policy of NASA, according to guidelines issued by President Donald Trump in 2017.

NASA, which has installed equipment on Beresheet to upload its signals from the moon, says it is inviting private sector bids to build and launch the US probes.

The US space agency plans to build a small space station, dubbed Gateway, in the moon's orbit by 2026, and envisages a manned mission to Mars in the following decade.