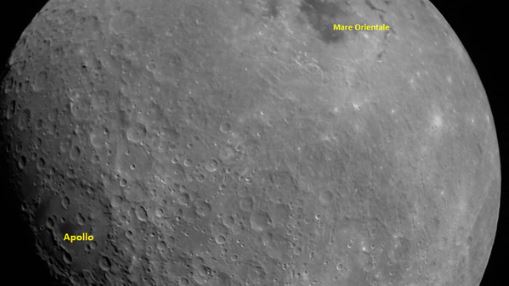 The first Moon image captured by Chandrayaan-2 Lander Vikram from a height of about 2,650km from lunar surface. (Photo: Agencies)

ISRO tweeted, "Take a look at the first Moon image captured by #Chandrayaan2 #VikramLander taken at a height of about 2650 km from Lunar surface on August 21, 2019."

"Mare Orientale basin and Apollo craters are identified in the picture," the tweet said.

Chandrayaan-2 successfully entered into the Moon's Orbit on Tuesday.

Launched on July 22, its lander named "Vikram" will attempt to make a soft-landing on the Lunar surface on Sept. 7. The lander has been named in honor of the father of Indian space research programme - Vikram Sarabhai.

Earlier this month, Chandrayaan-2 had sent the first set of pictures of the Earth.