The incident of Chinese search engine giant Baidu founder Robin Li Yanhong being splashed with water at the company's artificial intelligence (AI) conference in Beijing has unexpectedly brought Chinese netizens and vendors an opportunity to show their creativity and business instincts. 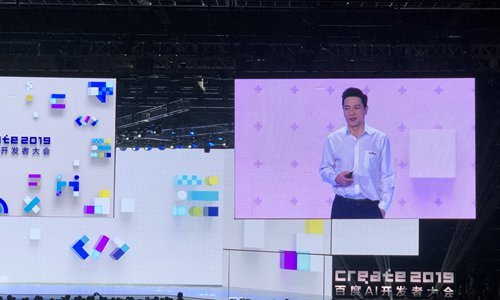 On Wednesday afternoon, items related to the incident - from the bottle of water, the T-shirt Li to the hair spray and gels Li uses - has been put onto one of China's largest e-commerce platforms, taobao.com.

Some T-shirts being sold are printed with the question "what is your problem," which is exactly the same English question Li asked when he was splashed with water by an unidentified man while speaking on stage. Other T-shirts have prints that copy the scene in cartoon. Those T-shirts are being sold between 49 yuan ($7.12) to 79 yuan, but none have been sold so far according to Taobao's sales records.

It seems like C'estbon, the brand of water which the unidentified man used to splash Li, has also elevated its national visibility through the incident. Some netizens also designed a promotional poster for C'estbon, depicting Li being splashed with water in cartoon as the background and slogans on the left read, "getting the same water as Li for 1.075 yuan, very cool and refreshing!"

Chinese netizens also created an idiom "Yanyunhuoshui" to mock the incident, which means that Li received a bottle of water from a man during his speech. "Even if you hate Li, you should not waste water," one weibo user named Zhainiangtiantiankan joked.

In response to the incident, Baidu said later on Wednesday that "someone has thrown cold water on AI at the conference. There are always all kinds of unexpected things that may occur on the road to AI, but Baidu's determination to move forward won't be changed."

Some said that the "online creativity show" shows Baidu's dwindling public image due to its controversial search engine business, which allegedly sells advertising listings to bidders without checking their claims. In 2016, a student died after trying a therapy from a hospital he found at the top of the Baidu web search list.