TOKYO, July 10 (Xinhua) -- Japan's Hayabusa2 space probe on Wednesday began its descent to an asteroid called Ryugu about 250 million km from earth where it will collect samples from an artificial crater that may contain water and organic substances, the Japan Aerospace Exploration Agency (JAXA) said. 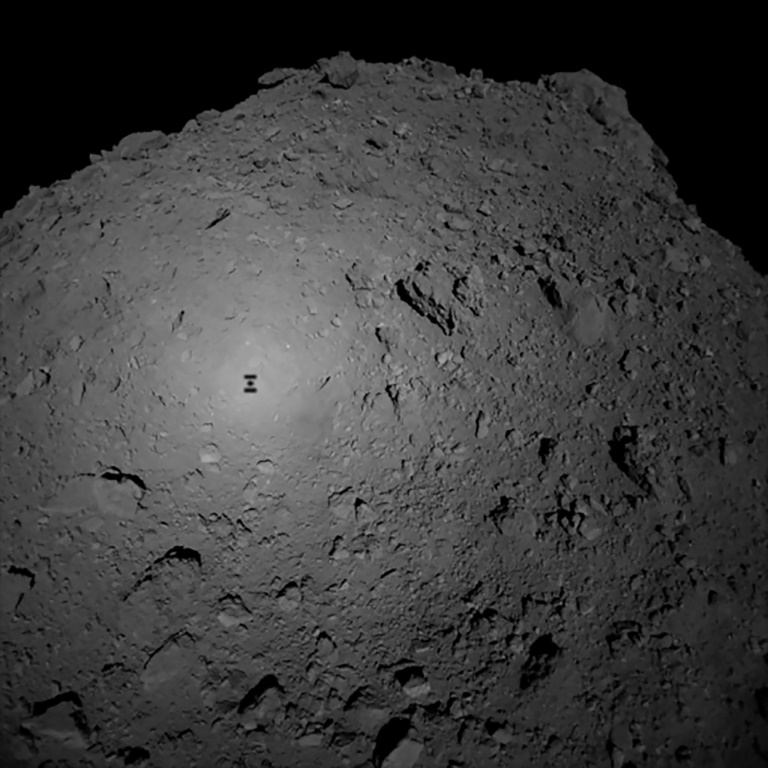 The Ryugu asteroid is thought to contain clues about the origins of life. (Photo: AFP)

This will be the second time the probe has landed on the asteroid, with the latest landing aimed at collecting debris from a crater made in April by the probe when it fired a projectile at Ryugu’s surface, the agency said.

Organic substances and water may be contained in the new samples to be collected by Hayabusa2, and along with a number of exploratory activities, JAXA's mission to Ryugu and the probe’s findings are hoped to possibly reveal clues about the solar system’s evolution and possibly the beginning of life itself.

According to JAXA, the probe began its descent at around 11:00 a.m. local time Wednesday, from a position of 20 km above the asteroid’s surface, at a speed of 40 centimeters per second.

When the probe is five km above Ryugu’s surface on Wednesday night, its speed of descent will be slowed to 10 cm per second, said JAXA.

Once it reaches five km above the surface Wednesday night, it will slow down and descend at a speed of 10 cm per second.

Following that, the probe will go into autonomous landing and navigation mode, according to the agency.

In February, Hayabusa2 successfully made its first landing on Ryugu and collected rock samples, JAXA said, adding that it has received data from the probe after its initial descent from 20,000 meters.

Hayabusa2 contains a device that has fired bullet like objects into Ryugu's rocky surface and "sucked" up the resulting debris to bring back to Earth to be examined, JAXA said of the probe’s thus far successful mission.

The initial touchdown on the asteroid was postponed from October last year, as JAXA found the surface of the asteroid, which at the time was about 300 million km from Earth and 900 meters in diameter, to be rockier than it first thought and needed more time to ensure the safe landing of the probe.

The Hayabusa2 space probe arrived above the asteroid in June last year.

On Oct. 3, Hayabusa2 released a small-sized Mobile Asteroid Surface Scout, also known as MASCOT, jointly developed by the German and French space agencies, which touched down successfully on the asteroid.

Prior to that, two small robotic rovers also launched from Hayabusa2 successfully landed on Ryugu on Sept. 22, JAXA confirmed.

The rovers have been taking images of the asteroid and performing other functions such as measuring its surface temperature.

JAXA said the images of Ryugu captured by the robots initially revealed a cluster of bumpy rocks and a lack of flat surfaces for the main probe to land on.

The agency since located a flat area near Ryugu’s equator that is free of rocks larger than 60 centimeters.

The scientists, according to JAXA's data, apparently successfully landed the probe on a far smaller landing area than originally planned.

The landing zone near the equator was just six meters in diameter, JAXA said.

The 600-kg Hayabusa2, which was launched from the Tanegashima Space Center in southwestern Japan on Dec. 2014, has experienced no problems, up until now, throughout its journey totaling 3.2 billion km.

The agency said that in total, Hayabusa2 is scheduled to make three landings on the asteroid and collect rock samples and will stay close to Ryugu for one and a half years.

Hayabusa2’s mission will be completed when it returns to earth in 2020 with the samples of rocks it has collected from Ryugu, which is thought to contain water and other materials that could possibly support life.