Japan's commercial rocket company failed to send a rocket to outer space on Saturday due to engine failure, according to Japan Today. 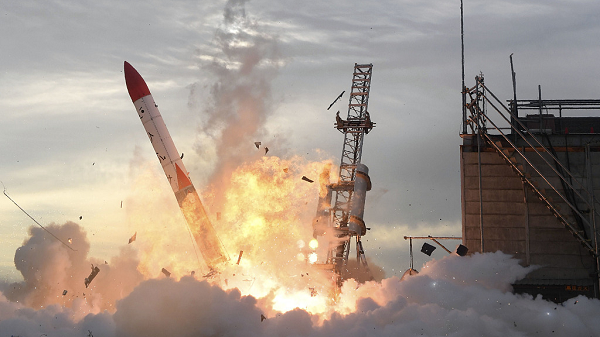 The company's MOMO-2 crashes to the ground and bursts into flames seconds after liftoff in Taiki on the Japanese northernmost main island of Hokkaido on June 30, 2018. (Photos: VCG)

After lifting off and reaching an altitude of 13 kilometers, the rocket was reported to have found an abnormality with its onboard computer, which triggered the engine shutdown.

The MOMO-4 rocket, developed by Intersatellite Technology, is a small experimental liquid rocket with a total length of 10 meters and a diameter of 50 centimeters. The takeoff weight is about 1.1 kilograms.

According to the company, the rocket can reach a maximum height of 120 kilometers. It was loaded with a low-frequency sound sensor developed by Kochi University of Technology to monitor natural disasters.

Part of the payload carried by the rocket can be recycled via the parachute onboard. But the MOMO-4 type was not designed for launching satellites, the company said.

Founded in 2013, the Hokkaido-based company is Japan's first private enterprise to attempt to launch a rocket independently. This is the fourth time that the company tried to send its rocket into space after failing twice.

The company's third launch in May was a success, which launched the vehicle to an altitude of over 100 kilometers – a distance beyond the boundary between the Earth’s atmosphere and space. For this startup, the road to space was also challenging. Two failures followed a successful suborbital launch last year in Hainan, an island province in southern China.

Other competitors have not been as lucky as iSpace. LandSpace Technology tried to send its solid-propellant Zhuque-1 to orbit last October, but failed due to an issue with the third stage.

OneSpace launched its carrier rocket, Chongqing Liangjiang Star, from the Jiuquan Satellite Launch Center last March, but ended up losing control of the rocket shortly after the first stage separation.

Failures are a a part of the process, especially in the early stages, said space industry expert Huang Zhicheng.

Space missions are challenging tasks. Even the U.S.-based SpaceX experienced several failures before its Falcon rocket made it to the sky.

At one point in time, space exploration was a special arena exclusive to a few countries. But after several decades, national teams are expanding, along with a group of private companies.

Apart from the scientific explorations, space missions have expanded and are also exploring things like space travel and space mining. A new space era driven by the commercial industry is taking off.