TECH Job transformation in the era of intelligent machines

Job transformation in the era of intelligent machines

As the fourth industrial revolution is gaining momentum, the job loss issue is a significant concern. Often the numbers being mentioned are based on conjectures -- like Bangladesh's garments industry will lose 60 per cent jobs by 2030. There are also pieces of evidence that technology has been polarising the job market across professions as well as countries. However, prediction of the effect of intelligent machines on the labour market appears to be conflicting. For example, a Swiss think-tank predicts that robots will displace 75 million jobs globally by 2022 but create 133 million new ones! There has also been disagreement about "an influential 2013 forecast by the Oxford University that found about 47 per cent of jobs in the US in 2010 and 35 per cent in the UK were at "high risk" of being automated over the following 20 years." Such conflicting predictions, as well as unclear polarising effects, often create grave confusion, leading to inaction. Such a situation demands answer to a vital question: how does labour-replacing technological change affect the allocation of workers to jobs, and what are its effects on wage distribution? 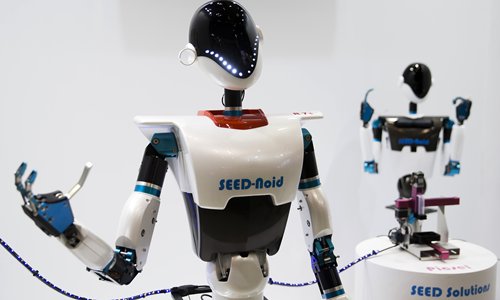 Technology availability opens the option of redesigning tasks and their allocations to two major factors of production: machines and workers. Within the context of organisational economics, firms optimally design or acquire machines, train workers, and assign these factors to tasks. In a firm, there are three broad categories of jobs: i. low skilled workers at the bottom, ii. middle layer professionals, and iii. top management. Irrespective of its nature and position in the organisational hierarchy, every task demands certain knowledge and its execution. Part of a task-specific knowledge is the innate capacity of human workers, and the remaining part is acquired through training. For example, without having formal training, being empowered with innate capacities, a little kid learns how to detect and hold an object, or walk through a crowd. On the other hand, machines are built with inanimate materials, which are devoid of knowledge. Through meticulous effort, knowledge is built in the machines to play a role in executing tasks, often in partnership with human workers.

Production related tasks are highly knowledge-intensive. But, to our surprise, workers having the least amount of formal education or training are performing them. In performing these tasks, workers are executing a lion's share of knowledge through their innate capacities like vision, touch, manipulation, movement, and natural language communication. Consistent with the findings from computer science and robotics, these tasks are challenging from an engineering perspective but easy for humans to carry out due to their innate capacities. Despite the massive engagement of innate capacities, which are highly difficult for machines to acquire, every production-related task also demands additional codified skill that can be acquired through training. Over the years, tools are being developed to gradually take over this segment, consequently increasing productivity and lowering the demand for labour. To facilitate this, tasks are divided into an increasing number of sub-tasks, and machines are developed to take over the codified knowledge component in executing them. As a result, contrary to common perception, training-needs for workers in performing these tasks have been diminishing. Such an effect is also reducing the variability of usable skills among workers resulting in growing equality in pay. Evidence cited in different research reports substantiates this reality.

In the middle layer of the organisational hierarchy, professionals require high-level education and training to qualify for such jobs. These tasks demand high-level training intensity to acquire the needed knowledge. Through education and training, codified knowledge is developed among these professionals to execute given tasks, whether in processing numbers, solving mathematical equations, or diagnosing diseases. It has been found that information and communication technologies have empowered us to build such codified knowledge competence in machines. It's far easier to empower machines to calculate the standard deviation of a series of numbers than teaching a machine how to read number plats by processing images. As a result, over the last several decades, there has been disproportionate job loss in the middle layer of the organisational hierarchy. Such an effect is often termed job polarisation or hollow-out middle layer.

The top management task demands high-level codified knowledge to scale up vital innate capacities like imagination, abstraction, and articulation to comprehend the past and present dynamics, and predict the unfolding future. The growth of ICT based innovations in the form of data analytics or enterprise resource planning software have been empowering the top management capability, as opposed to making those jobs redundant. As opposed to repeating the past decisions or replicating the decisions taken by competing firms, top management of firms is required to make different decisions. The unfolding dynamics primarily demands this uniqueness, often created by technology innovation. For example, robotics, automation, and intelligent machines have been shaping both product and process innovation, creating waves of change in virtually every industry. As a result, top management is demanding increasing support from a decision-making system to deal with the growing uncertainty. Often help from technology is falling short in dealing with the technology triggered complexity, resulting in growing demand for top management performance, which is creating higher-level inequality in wages at the top layer.

Over the last 50 years, a large chunk of middle layer jobs has been delegated to machines. Although those tasks require high-level training, the needed knowledge is codified, which is highly amenable to be embodied into machines. On the other hand, bottom layer tasks requiring innate human capacities were left to low skilled workers. Most of the jobs for export-oriented manufacturing in developing countries like Bangladesh fall into this category.

Emergence of intelligent machine technology has created the opportunity of building innate human capacities like vision into machines. But it is quite challenging. For example, upon investing more than $80 billion in R&D, researchers have not succeeded yet in fully imitating human driving capacity into automobiles. Similarly, progress is being made to replicate vision-guided feeding of fabric to sewing machines. Despite the difficulty, it's being anticipated that low skilled tasks requiring innate human capacity are also the target of automation in the age of intelligent machines.

The effect of intelligent machine technologies driving the fourth industrial revolution will cause job loss in the middle layer. Despite the high-level engineering complexity, low skilled tasks requiring innate human capacities are now targeted to be automated too. Contrary to these two levels, the top management task will likely be demanding increasing human role, to be obtained through the innate endowment, technology augmentation, and formal training. On the other hand, the effect of technology on jobs will also vary among countries, as technology-innovating countries will be creating jobs, while killing jobs in labour-saving technology importing countries. Despite conflicting predictions, intelligent machine technology will kill as well as create jobs.  But the effect of smart machines on the labour market will not likely happen in a uniform and linear fashion. It will vary across organisational layers, firms, industries, and countries.