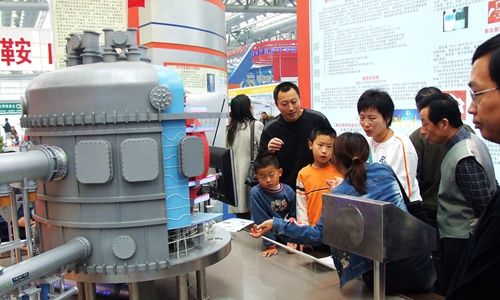 Public visit the model of the artificial sun in Hefei, capital of East China's Anhui Province in October 2006. Through the model, they can know how the machine generates electricity. (Photo: VCG)

Chinese and British scientists have designed a material that can assist in the generation of controlled nuclear fusion and generate energy in a similar process to the sun.

The research, by scientists from Liverpool University in the UK and Xi'an Jiaotong-Liverpool University, can efficiently obtain deuterium, a heavy isotope of hydrogen, which a team member said could pave the road of China's artificial sun project.

"It can efficiently select deuterium from a gas mixture and absorb them in large quantities." Ding Lifeng, a scientist from the Chinese side, told the Global Times on Wednesday.

Deuterium, a primary fuel for controlled nuclear fusion, is diluted in nature and therefore expensive.

High-purity or enriched, deuterium is usually obtained by separating the isotope out of a hydrogen-deuterium mixture, which is energy-intensive and inefficient, Ding said.

"Our research helps solve the shortage in deuterium supply and has the potential to secure the fuel source for the fusion process," Ding said.

The US, Russia and the European Union are also researching controlled nuclear fusion as one of the most important future technologies that generate energy in a safe way, without nuclear waste.