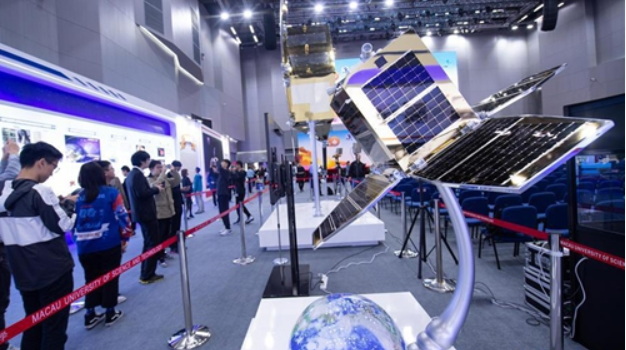 During the opening ceremony, Vice Administrator of China National Space Administration (CNSA) Wu Yanhua also announced that the CNSA would set up Macao Space Exploration and Science Center to assist deep space exploration cooperation between China and international society, and help such institutions in Guangdong-Hong Kong-Macao Greater Bay Area to work with each other.

The satellite, which will be launched in 2021, is the first of its kind to probe the South Atlantic Anomaly (SAA), a region of reduced magnetic intensity where the inner radiation belt is at its lowest altitude.

Geophysicists believe the study of SAA can help them find the reason of Earth's weakening magnetic field.

Prof. Zhang Keke, chief of the laboratory, is a world renowned Earth and planetary physicist. He came to Macao from University of Exeter, Britain in 2018.

"This satellite program is moving forward much faster than I have expected," he told Xinhua in an recent interview. "I can concentrate all the resources into this key laboratory."

Zhang's research team has about 40 experts and scholars, including leading figures and young talents from well-known global institutions, and have participated in major projects of China's deep space exploration long before the laboratory had been recognized by Ministry of Science and Technology.

China is set to launch its Mars explorer in 2020. Zhang's team also has taken part in the research and development of the Mars explorer.

"The Mars explorer will collect many data from Mars and we will use our equipment to analyze those data for the study of Mars' inner structure and planetary evolution history," he said.

Photo taken on Oct. 30, 2019, shows researchers at the China's State Key Laboratory of Lunar and Planetary Science in Macao University of Science and Technology. (Xinhua/Liu Jinhai)

Associate Prof. Zhu Menghua from the laboratory made a breakthrough this year, as his paper Reconstructing the Late-accretion History of the Moon was published in Nature in July.

Zhu used the supercomputing platform of the MUST to study the process of different celestial bodies hitting the Earth and the Moon at different angles and the differences in retained mass through multiple simulation, and revealed the mystery of lack of iron in the lunar mantle compared with that of earth.

This experiment and its result provide new point of view to the late-accretion history of the Earth and moon, indirectly proved the great collision theory of the formation of the moon, and provide new scientific support for data analysis of Chang'e 4 and subsequent lunar and Mars exploration missions.

Zhu has also studied planetary biology, a field where scientists try to find what kind of extreme environment can survive.

He told Xinhua that the planetary biology is a hot spot in international community but a new territory in China.

Associate Prof. Andre Guimaraes Lemos Antunes, one of the laboratory's planetary biologists, said China is at an exciting stage of space exploration. In Macao, the State Key Laboratory has convenient conditions to conduct cutting-edge research and engage in China's space program.

"This is very interesting and I am willing to contribute to all of this," he said.

As a Portuguese, Antunes feels at home in Macao. "The interesting thing about Macao is that it has historical ties with Portugal, so I'm very happy to work here."

The team is very diverse and interdisciplinary. Working side by side with colleagues in different fields such as computer modeling, space exploration and geophysics has been an interesting experience, he added.