TECH Major telecom carriers team up on base stations

Major telecom carriers team up on base stations 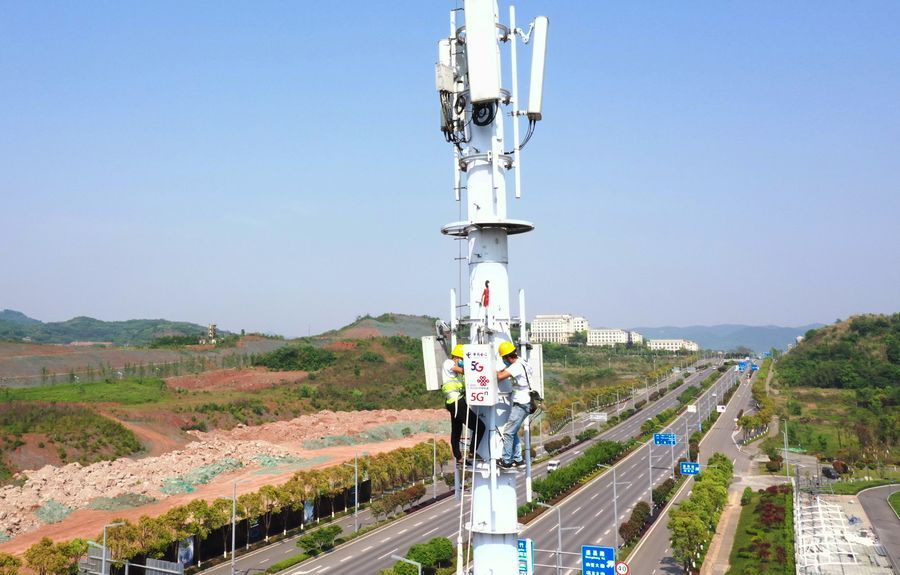 China Unicom and China Telecom have jointly built and now operate more than 300,000 5G base stations after two of the nation's big three telecom operators announced a year ago that they would join hands to reduce construction costs for the fifth-generation wireless technology.

Wang Xiaochu, chairman of China Unicom, said the two companies' 5G co-construction and sharing initiative has helped save them 60 billion yuan ($8.87 billion) in construction investment costs, which enabled them to basically achieve the goal of quickly forming 5G network coverage in the shortest time possible and with the least investment.

China Unicom and China Telecom announced in September 2019 that they would jointly build and share network infrastructure to offer the same level of service.

Based on their total number of 4G base stations, China Unicom and China Telecom are working together to build 5G networks in 15 cities, including Beijing, Tianjin, Shanghai and Nanjing, Jiangsu province.

China Unicom is independently building 5G networks in nine cities in Guangdong province, five in Zhejiang province and eight in central, eastern and northern regions including the provinces of Hebei, Henan, Heilongjiang, Jilin, Liaoning, Shandong and Shanxi and the Inner Mongolia autonomous region. China Telecom, meanwhile, is in charge of building 5G networks in 10 cities in Guangdong province, five cities in Zhejiang province and 17 other regions.

The two companies said earlier that they were working hard to commercialize stand-alone 5G networks by the end of September 2020. Currently, all of their operational 5G networks are based on non-standalone 5G networks which stilly partially rely on 4G infrastructure.

Once stand-alone 5G networks are commercialized, they will better support more cutting-edge applications such as the industrial internet and self-driving cars, said Xiang Ligang, director-general of the Information Consumption Alliance, a telecom industry association.

"5G construction will not only bring operators opportunities and new streams of revenue, but also boost development of the whole industry and economic growth,"Xiang said.

China Unicom and China Telecom said their 5G network has so far expanded to all prefecture-level and above cities in the country, and achieved the world's first peak rate of 2.7 gigabytes per second.

Ke Ruiwen, chairman of China Telecom, said the two companies will make more efforts to strengthen partnerships with a wide range of industries and accelerate efforts to build new infrastructure, which can help expedite industrial digitalization.

Wen Ku, spokesman for the Ministry of Industry and Information Technology, the nation's top industry regulator, said earlier this month that China has built over 480,000 5G base stations so far, and more than 100 million devices have been connected to the 5G network, as part of the nation's broader push to accelerate 5G deployment.

"Chinese companies are applying 5G technologies to sectors such as manufacturing, healthcare, media and transportation, despite the fallout from COVID-19," Wen said.

Wen added that Chinese companies have pioneered a wide range of applications, such as conducting a 5G-powered remote surgery on a human brain, transmitting ultrahigh-definition television content through 5G networks and piloting the operation of self-driving buses and automobiles in some cities.

As of July, about 99 telecom operators in more than 46 countries and regions have started offering 5G services, Wen said, adding that China is working hard to promote cross-industry cooperation in 5G, which is one of the keys to giving a full display of 5G's potential.

According to the Global System for Mobile Communications Association, the international association of mobile operators better known as GSMA, China has consolidated its position as a global leader in 5G, with the nation expected to account for 70 percent of global 5G connections in 2020, despite the short-term headwinds from the outbreak.