Microsoft Corp is working closely with the Chinese government on 21 existing incubation centers across the country to help local startups better embrace artificial intelligence, according to a senior Microsoft executive. 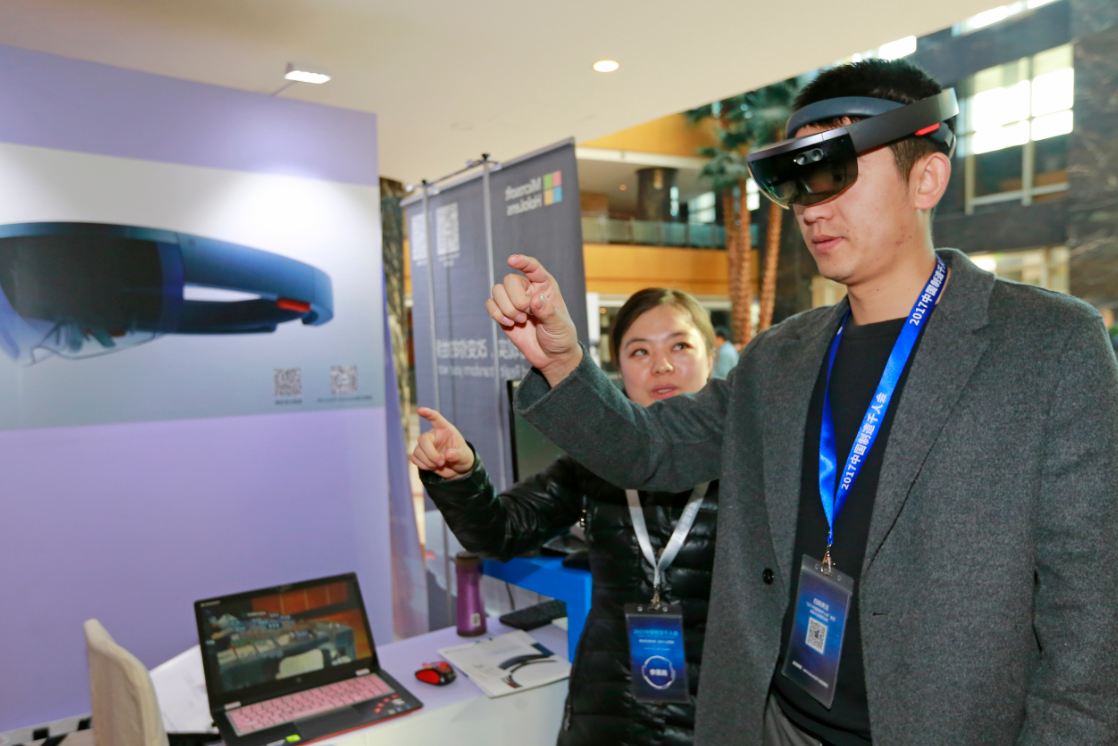 A visitor checks out a Microsoft virtual reality headset during an expo in Shanghai. (Photo: China Daily)

As a technology, AI is said to help double enterprise productivity by 2021, he said.

"In China, different (provincial) governments have different areas of focus by industry (from retail and manufacturing to financial services). So there's a growing opportunity (in the adoption of AI)," he said in a recent interview with China Daily.

Such centers are scattered across China, including the less affluent Inner Mongolia autonomous region and Yunnan province.

Microsoft engages with governments at various levels in Asian countries to propagate AI. According to Haupter, China is uniquely positioned due to Microsoft's longstanding research and development team here, which is also the company's biggest R&D facility outside of the United States.

Microsoft recently teamed up with Shanghai's Xuhui district government on building and enhancing certain AI capacities. The incubation center it launched with local authorities and Shanghai-based smart city solution provider Insea has nurtured over 100 startups since its establishment in 2016, he said.

It is of "the best quality" among such facilities it operates worldwide, he said.

"These companies cover fields of cloud computing, big data, IoT (internet of things) and AI. Total valuation has increased by more than 300 percent in the first year of operation," he said.

China is said to have higher potential in leveraging the power of AI. The rate of expected innovation improvements in China in 2021 is 2.6 times that of the current level.

Similarly, the rate of expected employee productivity gains in 2021 is 2.3 times than that of the current level.

Both these expectations eclipse the estimates of 1.9 times and 2 times, respectively, for the Asian average, according to a joint research report from consultancy IDC and Microsoft released last month.

According to Haupter, China stands to benefit from its large number of AI-focused people, the amount of data available, and strong government backing.

"For instance, Shanghai has always been the market where leaders take care of innovation and leaders are focusing on, and investing in, key industries and innovation," he said.

China's determination to climb the technological curve is shared by many business leaders. Oliver Steil, CEO of TeamViewer, a leading provider of remote connectivity solutions, said he is impressed by the speed of development in China, as well as the commitment and courage to invest in technology and bring it to scale.

He said despite the fact that there are also good discussions with governments in other regions, the momentum to carry things forward in China is entirely different. "As innovators to drive new use cases, we depend on customers to actually capture their opportunities and do something to drive it forward," said Steil.

Incidentally, TeamViewer has announced it will open its first office in China this year.

In the field of AI, Microsoft has teamed up with Airdoc to use visualization to spot tell-tale signs of chronic illnesses. It is also helping logistics company OOCL to improve network operations and enhance efficiency, Haupter said.

He identified the flip side of Chinese AI players: most of their businesses are currently confined to the domestic market.