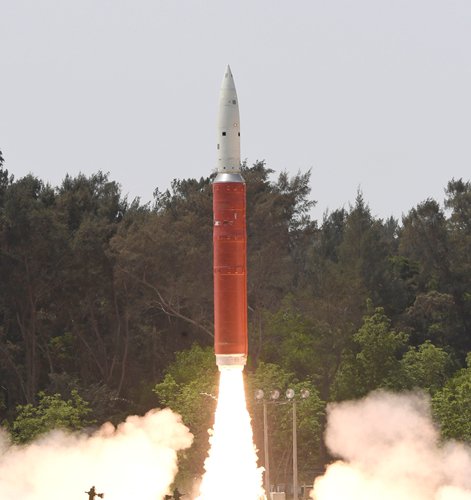 A Ballistic Missile Defence (BMD) interceptor takes off to hit one of India's satellites on March 27. (Photo: VCG)

Military-civilian integration may be behind India's newly obtained anti-satellite (ASAT) capacity, although that capacity is still at the preliminary stage and lags behind leading countries, a Chinese military analyst said on Wednesday. On March 27, Indian Prime Minister Narendra Modi announced that his country had successfully conducted an ASAT test from a launch site on Abdul Kalam Island in the Bay of Bengal.Known as Mission Shakti, the test was seen in India as proof the country was a space power on par with the US, Russia and China.Wei Dongxu, a Beijing-based military analyst, said the Indian ASAT system still lags behind those of world-leading military powers."While it constitutes a threat or deterrence to low-Earth orbit satellites with altitudes of 300 kilometers, at the moment it can't reach high-value military satellites, which typically hover in higher orbits of 800 kilometers to 1,000 kilometers above the Earth," Wei told the Global Times on Wednesday.The US, China, and Russia previously conducted similar tests."The Indian system also has a weak link in its long-range phased array radar, so its system cannot conduct precision tracking and targeting of objects in outer space, reducing its early warning capacity," Wei said, noting despite some efforts that included importing Israeli radar hardware and import substitution, progress has been slow. India has been steadily building up its space warfare capacity, banking on the integration of military and civilian technologies, according to Wei. Its heavy-lift carrier rockets derived from Russian technologies have paved the way for improvement in India's ballistic missile strength and accumulated technology for its ASAT, Wei said. India's spending on space research almost tripled from 41.63 billion rupees ($602 million) in 2009-10 to 115.38 billion rupees in 2018-19, Indian news site business-standard.com reported in March.As a proportion of GDP, India spends about the same as China, with its space budget accounting for about 0.06 percent of GDP in 2018-19, the business-standard report showed, citing OECD data.Chinese Ministry of National Defense Spokesperson Wu Qian told a press conference on March 28 that China hopes nations will take real action to maintain peace in space, when asked to comment on India's ASAT missile test.The Indian system is like a combination of India's relatively mature ballistic missiles and missile defense interceptors, Wei said.