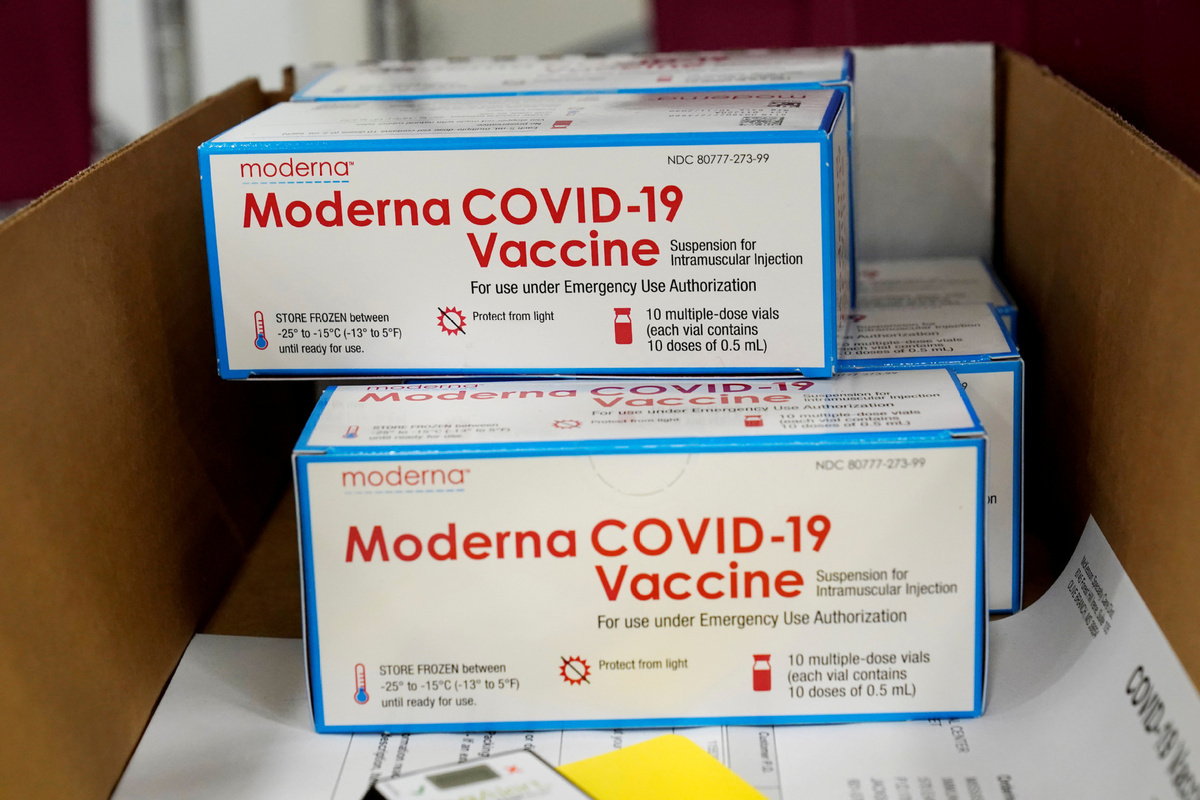 Boxes containing the Moderna COVID-19 vaccine are prepared to be shipped at the McKesson distribution center in Olive Branch, Mississippi, US on Dec 20, 2020. [Photo/Agencies]

Moderna's COVID-19 vaccine weakens new variants of the coronavirus that have emerged in the UK and South Africa, the company announced Monday.

But the vaccine provokes less of response against the South African variant, and so the company said it is developing an alternative form of the vaccine that could be used as a booster shot.

A Pfizer study released last week found that its vaccine probably protects against the British variant. More than two dozen countries have reported cases of the variants of the coronavirus found in South Africa and Brazil.

On Monday, the US reported the first known case in the country of the variant found in Brazil.

Health officials in Minnesota said the case involved "a Minnesota resident with recent travel history to Brazil", according to The Washington Post.

President Joe Biden on Monday reinstated COVID-19 travel restrictions on most non-US travelers from Brazil, Ireland, the UK and 26 other European countries that allow travel across open borders. He also added South Africa. The new requirements go into effect on Tuesday.

White House press secretary Jen Psaki said South Africa was added because of concerns the variant has spread beyond that nation.

As Moderna made its announcement, Merck & Co, one of the world's leading vaccine makers, said it was stopping the development of both of its COVID-19 vaccine candidates.

The Kenilworth, New Jersey-based company said the shots generated a disappointing immune response to effectively protect people against the virus.

Merck said it would now focus on advancing two experimental COVID-19 drugs. The company said it expects test results for the pair of drugs in the coming weeks, and it could ask regulators to authorize use if the results are positive.

Moderna said that results from studies show that its vaccine produced immune-system agents known as neutralizing antibodies against "all key emerging variants tested", including B.1.1.7 and B.1.351, first identified in the UK and South Africa, respectively.

While the studies showed no significant impact on triggering an immune response to the UK variant, there were sharply decreased antibody levels against the South African variant, Moderna said.

"In the event that this virus continues to mutate in this direction, and a year from now is still circulating in some way, we think it's prudent that we have tools like a booster vaccine to address that," Stephen Hoge, Moderna's president, told The Wall Street Journal.

The booster candidate, mRNA-1273.351, will advance into preclinical studies and a Phase 1 trial in the US.

Moderna took 42 days to develop the original vaccine, and Tak Zaks, Moderna's chief medical officer, told The New York Times he believes the company could make the booster shot "hopefully a little faster this time, but not much".

The study results haven't yet been published or peer-reviewed, but have been submitted to bioRxiv, which posts preliminary studies online.

Moderna said its vaccine will be protective against the South African strain in the short term, but "what is unknowable right now is what will happen in six months, 12 months, especially to the elderly because, as you know, they have a weaker immune system", Stéphane Bancel, CEO of Moderna, said in an interview with CNBC on Monday.

"Because of that unknown ... we decided to take into the clinic, out of an abundance of caution, a new vaccine," he said.

Meanwhile, the US reported a 21 percent drop in new coronavirus cases last week, while the number of people hospitalized in the US due to COVID-19 also fell. The country reported more than 130,000 new cases for Monday, the eighth consecutive day the daily total was below 200,000, according to Johns Hopkins University data.

Fauci said the improvements appear to be a natural plateau after the holiday surge and not the effect of people who have been vaccinated.

In California, a hot spot where hospitals have been overwhelmed by the number of COVID-19 patients, new cases fell 32 percent in the past week.

California lifted regional stay-at-home orders statewide on Monday, allowing restaurants to reopen for outdoor dining, and businesses like gyms and hair salons to reopen with some restrictions. Health officials cautioned that "the COVID-19 pandemic is far from over".