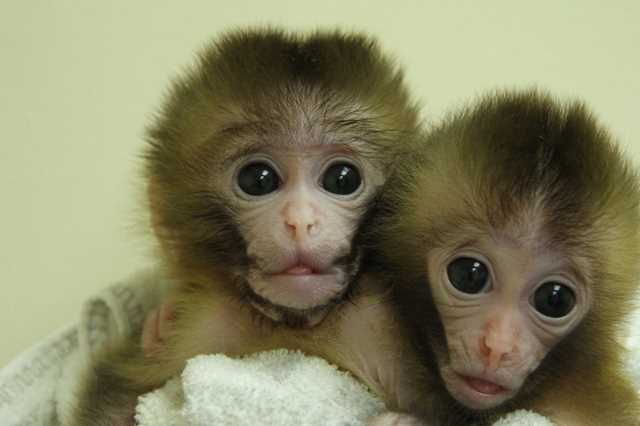 A pair of 15-day-old genetic modified rhesus macaque monkeys implanted with the human MCPH1 gene to study its effect on the origin and evolution of human intelligence, as well as brain diseases such as Alzheimer's disease and developmental disorders such as autism. (Photo: China Daily)

An experiment conducted by Chinese and US scientists on improving monkeys' cognitive function has been found to follow international animal rights standards, according to the Chinese research institute.

The study implanted 11 rhesus macaque monkeys with copies of the human MCPH1 gene, which scientists believe is crucial for humans' brain development and evolution.

The study also found that transgenic monkeys' brains took longer to develop, in a similar fashion to humans.

The experiment has divided the scientific community however, with a number of Western scientists criticizing it as unethical, while some went as far to suggest, perhaps ironically, that it could lead to a Planet of the Apes-type scenario.

The Kunming Institute of Zoology told China Daily in a statement that the experiment was ethically approved in 2010.

In 2015 the animal rights committee of Kunming Biomed International, a research organization specializing in nonhuman primates, also declared the animals were being treated humanely in every step of the experiment, in accordance with domestic and international regulations, the statement said.

In 2017 the institute's bioethics review committee again evaluated and approved the experiment before applying for National Natural Science Foundation of China funds, with the project gaining the foundation's support.

"For research purposes, there are precedents of scientists implanting human genes into lab animals such as mice, rats, and macaque monkeys, and these researchers have made great contributions to understanding life, disease mechanisms and clinical drug development."

In 2008 US scientists implanted macaque monkeys with Huntington's disease to further understand the condition and possibly identify a new form of treatment, with the project's findings published in the journal Nature.

In 2009 Japanese scientists created the world's first transgenic primates and bred monkeys with a gene that made the animals' skin glow a fluorescent green.

Scientists said the research, also published in Nature, could open up new prospects for medical research.