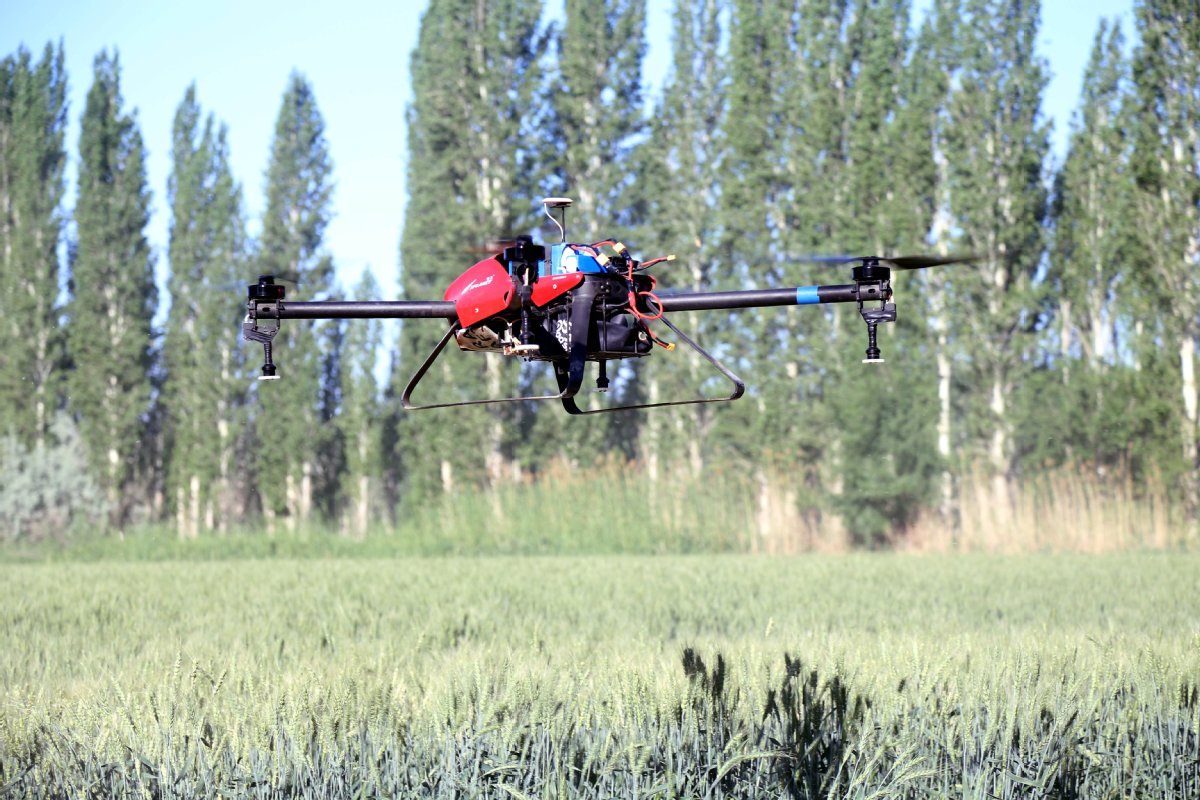 A drone is used to spray pesticide on a wheat field in Bayingolin, Xinjiang Uygur autonomous region. (Photo: Xinhua)

An increasing number of drone operators are helping farmers across China harvest their crops, reducing the costs of pesticides and increasing yields.

Over the past year, he has traveled to the eastern province of Jiangsu, the northeastern province of Heilongjiang and the Inner Mongolia autonomous region in the north, using drones to spray agrochemicals for different crops, including wheat, corn, soybeans, sorghum, sesame, cotton, and even forests. "Everywhere the team arrived, we were warmly welcomed," he said.

Ma and his team spent more than a month in Xinjiang, the most important cotton-producing region in China, with over 2.5 million hectares of cotton fields.

Zhang Lin, a major cotton farmer in Xinjiang's Yuli county, was skeptical about the small flying machine when several representatives from XAG, a leading agricultural high-tech company with its headquarters in Guangzhou, Guangdong province, introduced the drones to him in 2016.

"They said the drones can spray defoliant, consuming much less water than tractors do. They also promised that there would be no fee if I was not satisfied with the results, and the crops would not be damaged. So I decided to have a go," Zhang said.

An operator positioned himself on the edge of the farm, Zhang said. Manipulating the controls with his fingertips, the drones took off, sprayed chemicals along the route and returned automatically.

"It's amazing," Zhang said. "It costs less than renting tractors. Drones use less water and chemicals. Tractors used to damage around 8 percent of the cotton and also harmed the soil. Now, drones can solve all those problems."

Since new technologies have won the acceptance of cotton farmers in Xinjiang in recent years, more drone operators have come to the region to offer their services.

Statistics from XAG show that more than 4,500 of the company's drones helped local farmers defoliate 866,666 hectares of cotton this year.

The regional agricultural administration said that by the end of this year, the number of UAVs for farm use operating in Xinjiang is expected to exceed 5,000.