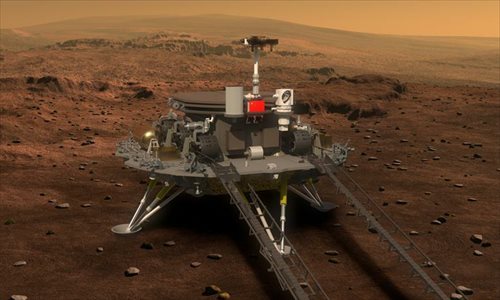 Lunar probe and space project center of Chinese State Adiministration of Science, Technology and Industry for National Defence shows the concept portraying what the Mars rover and lander would look like, August 2, 2016.  (Photo: Xinhua)

China is eyeing the period between July and August this year to launch its first-ever Mars probe mission, codenamed Tianwen-1, with the probe expected to reach the Red Planet gravity field by February 2021.

According to Bao, the Long March-5, which is currently China's largest and strongest carrier rocket, will be tasked with the launch mission.

"The probe will reach the Mars gravity field by February 2021, before it is 'captured' by Mars and then initiates the key orbiting and landing process," Bao noted.

The minimum distance between Mars and Earth is about 55 million kilometers, as the two planets only come this close every 26 months, the CASC told the Global Times on Monday.

After landing, the lander-rover will stay on the surface of Mars for 90 Martian days, which is slightly more than three months on Earth, during which the rover will seek to achieve objectives such as conducting patrol and detection work as well as carrying out Martian geomorphic feature studies.

China's Mars orbiter will carry seven scientific payloads, while the rover will have six, according to the CASC. Safely landing the Mars rover after the probe enters the planet's orbit, which will take around 7 minutes, will be one of the most decisive stages of the whole mission.

After leaving the Earth, the Mars probe will travel in space at a speed of 4.8 kilometers per second, and a safe soft landing on the Red Planet would mean it will decelerate to 0 meter per second at the landing site, which will take around seven to eight minutes, Bao explained.

The landing process will be separated into four stages. First, the aerodynamic decelerator will reduce the flight speed of the probe from 4.8 kilometers per second to 460 meters per second, which will take roughly 290 seconds, the CASC scientist said.

Then the probe will deploy the parachute to further decelerate to 95 meters per second within approximately 90 seconds, before the thrust reverser kicks in and reduces the speed to 3.5 meters per second, which will take 80 seconds.

As the Mars lander reaches about 100 meters above the surface, the lander will enter a hovering form and decelerate to a relative speed of 0 meter per second with the ground, while the hovering form will enable it to automatically avoid obstacles and uneven terrain, the CASC revealed.