Multiple software issues and a poor radio link doomed a test flight of Boeing's crew capsule late last year, NASA said Friday, revealing for the first time a glitch that could have destroyed the spaceship on its re-entry. 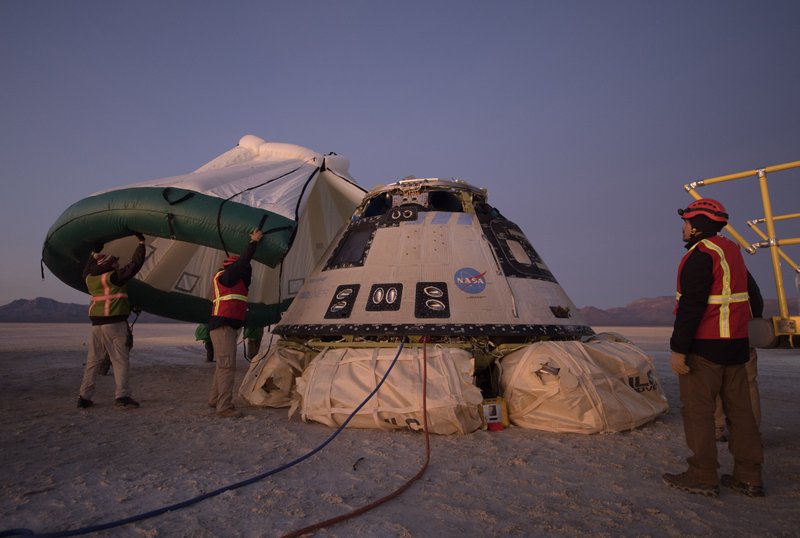 In this Sunday, Dec. 22, 2019 photo made available by NASA, Boeing, NASA, and U.S. Army personnel work around the Boeing Starliner spacecraft shortly after it landed in White Sands, N.M. On Friday, Feb. 7, 2020. (File photo: AP)

The Starliner's December 20 mission, an uncrewed test flight, was ended early when it failed to engage its thrusters on time, due to a previously reported faulty timer.

NASA said in a statement Friday that the problem arose because it incorrectly pulled time from its Atlas V launch rocket, creating an 11-hour mismatch.

The second problem was intermittent space-to-ground communications, impeding the flight control team's ability to command and control the vehicle.

A third issue was confirmed by NASA and Boeing for the first time: a coding error in the program that governs Starliner's preparation for reentry into Earth's atmosphere.

The error would have caused the service module, which contains the spacecraft's support systems and is supposed to detach prior to re-entry, to be pushed toward the crewed module.

This could have resulted in impact, destabilizing the ship or damaging its heat shield, said Jim Chilton, senior vice president of Boeing's Space and Launch division.

The error was caught and fixed via a software patch the night before landing, said John Mulholland, project manager for the Starliner.

Douglas Loverro, a senior NASA official, said the multiple errors pointed to "insufficient" oversight by his agency, but he also added: "It looks as if there could possibly be process issues at Boeing. And so, we want to understand what the culture is at Boeing, that may have led to that."

Starliner's failure was the latest serious setback for Boeing, which is still reeling from two fatal crashes of its 737 Max aircraft. The crashes, in October 2018 in Indonesia and in March 2019 in Ethiopia, claimed a total 346 lives.

The findings of an independent review into the latest failure will be ready in late February.

NASA officials have refused to be drawn on what it all means for the future of Starliner, which is scheduled to take its first astronauts to the International Space Station in the coming months.

Meanwhile, Boeing's space rival SpaceX is preparing for its first crewed flight with its Crew Dragon, likely in the second quarter, according to boss Elon Musk.

NASA has committed to pay the two companies $8 billion in return for six trips carrying four astronauts each to the ISS. The US has relied on Russian rockets to carry its crews to the space station since ending the Space Shuttle program in 2011.