China Aerospace Science and Industry Corp will soon launch the nation's biggest solid-propellant carrier rocket and is working on new models that will be even larger and stronger, a project insider said. 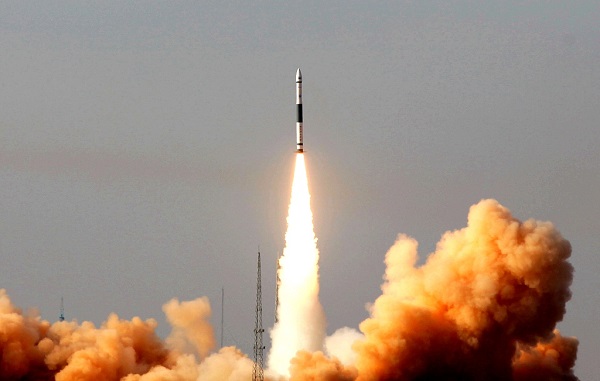 Hu Shengyun, a senior rocket designer at the CASIC Fourth Academy in Wuhan, Hubei province, which develops and builds the Kuaizhou series, said the maiden mission of the Kuaizhou 11 will take place soon at the Jiuquan Satellite Launch Center in northwestern China.

He spoke to China Daily on the sidelines of the ongoing second session of the 13th National People's Congress in Beijing as he attends the national legislature's annual meeting.

The researcher said the Kuaizhou 11 is China's largest and most powerful solid-propellant carrier rocket, with a length of 25 meters, a diameter of 2.2 meters, and a liftoff weight of 78 metric tons. It is able to place a 1-metric-ton payload into a sun-synchronous orbit at an altitude of 700 kilometers, or a 1.5-ton payload into a low-Earth orbit.

Before it, the biggest solid-fuel civilian rocket in China was the Long March 11, with a length of 20.8 m, a diameter of 2 m and a liftoff weight of 58 tons.

Information previously published by CASIC said the rocket that will fly first is to carry six satellites.

While preparation for the Kuaizhou 11 mission is underway, designers at the Wuhan academy have begun to develop two new solid-propellant rockets of bigger size and carrying capacity－Kuaizhou 16 and 21－said Hu, the rocket designer.

Hu said the two new models are likely to conduct their first mission in about five years if all goes well. Like other Kuaizhou types, they will be mainly tasked with meeting demands in commercial launch service from the burgeoning satellite industry in China.

Meanwhile, designers also hope the Kuaizhou 21 will have the opportunity to serve government space programs such as the space station program, he added.

Zhang Di, a vice-president at the academy, previously told China Daily that the Kuaizhou 21 will be powerful enough to transport supplies to the country's future space station or to ferry robotic probes to planets far from Earth.

CASIC began to develop the Kuaizhou series in 2009 as a low-cost, quick-response product for the commercial space market. The company has launched four: two Kuaizhou 1s and two Kuaizhou 1As.