LONDON, Feb. 7 (Xinhua) -- The British built rover that will roam over the surface of Mars in 2021 has been named after the female scientist who co-discovered the structure of DNA. 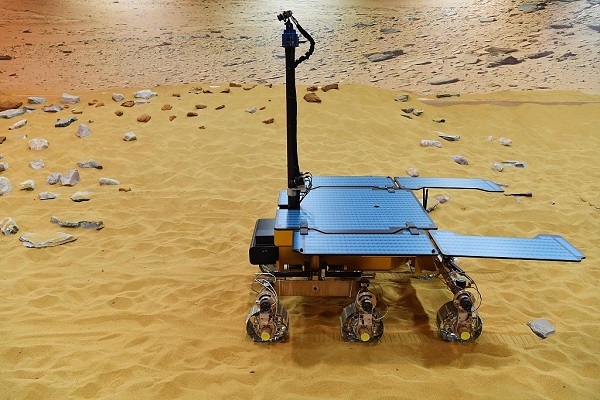 A picture shows a working prototype of the newly named Rosalind Franklin ExoMars rover at the Airbus Defence and Space facility in Stevenage, north of London on February 7, 2019. (Photo: VCG)

The announcement was made in the "Mars Yard" at Airbus Defense and Space UK in Stevenage, where the ExoMars rover is being built.

Skidmore said: "It is a tremendously fitting tribute that the rover has been named after Rosalind Franklin as she helped us understand life on Earth and now her namesake will do the same on Mars."

"I hope 'Rosalind the rover' will successfully persevere in this exciting adventure, inspiring generations of female scientists and engineers to come," added the minister.

Over a third of the science instruments used in the ExoMars mission are led by women.

Alice Bunn, international director at the UK Space Agency, said: "Rosalind Franklin is one of science's most influential women, and her part in the discovery of the structure of DNA was truly ground-breaking. It's fitting that the robot bearing her name will search for the building blocks of life on Mars, as she did so on Earth through her work on DNA."

The name was chosen by a panel of experts from a shortlist submitted by the public, following a naming competition which attracted nearly 36,000 responses.

Peake said: "This rover will scout the Martian surface equipped with next-generation instruments, a fully-fledged automated laboratory on Mars."

Cambridge graduate Franklin, born in 1920, was a British biophysicist, physicist and chemist who made major contributions to the understanding of the fine molecular structures of DNA. She died in 1958, but her contribution was not recognised in many science books until the 1990s.