TECH NASA about to pull plug on Mars rover, silent for 8 months

NASA about to pull plug on Mars rover, silent for 8 months 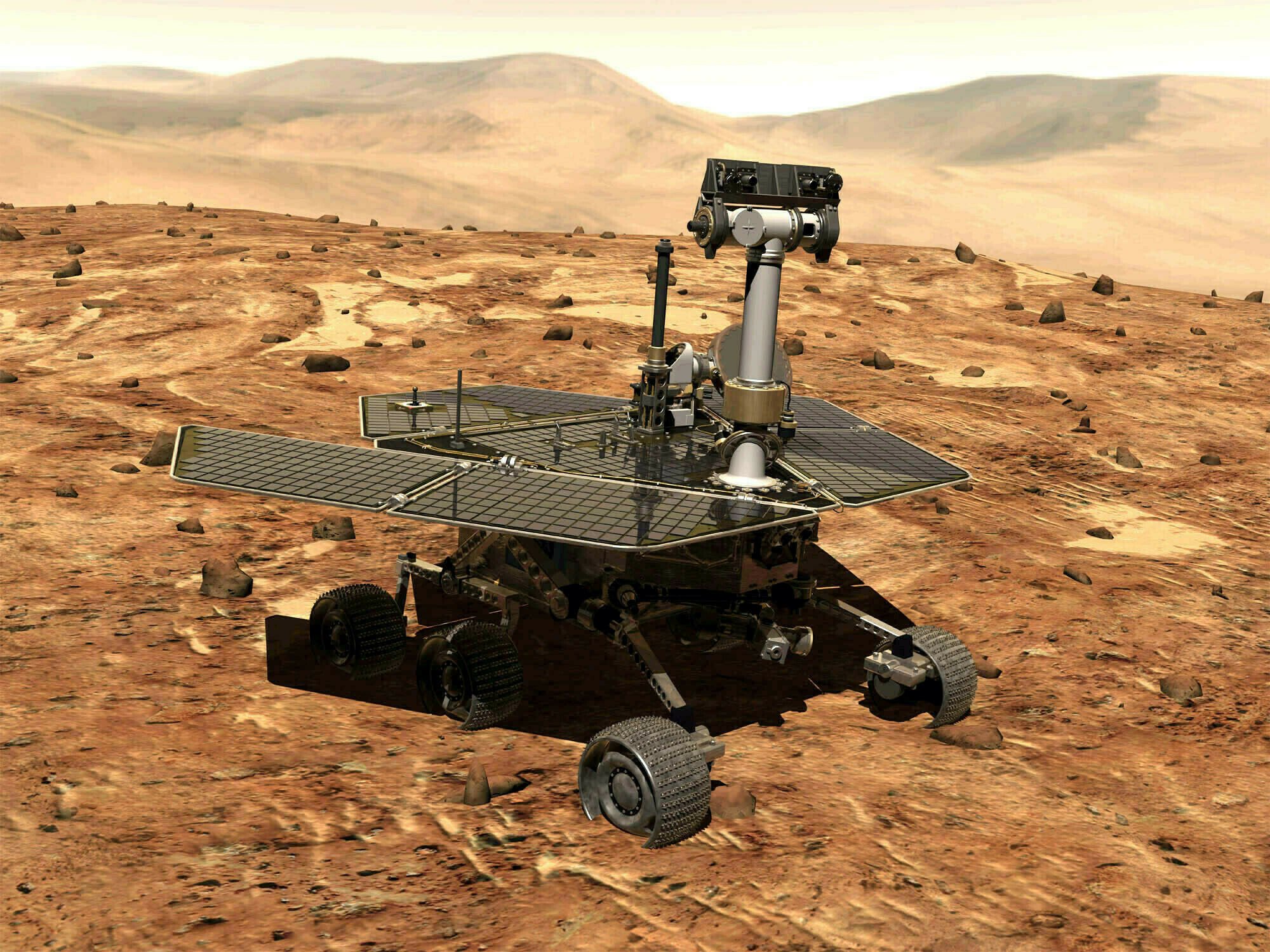 This illustration made available by NASA shows the rover Opportunity on the surface of Mars. (Photo: AP)

NASA is trying one last time to contact its record-setting Mars rover Opportunity, before calling it quits.

The rover has been silent for eight months, victim of one of the most intense dust storms in decades. Thick dust darkened the sky last summer and, for months, blocked sunlight from the spacecraft’s solar panels.

NASA said Tuesday it will issue a final series of recovery commands, on top of more than 1,000 already sent. If there’s no response by Wednesday — which NASA suspects will be the case — Opportunity will be declared dead, 15 years after arriving at the red planet.

Team members are already looking back at Opportunity’s achievements, including confirmation water once flowed on Mars. Opportunity was, by far, the longest-lasting lander on Mars. Besides endurance, the six-wheeled rover set a roaming record of 28 miles (45 kilometers.)

Its identical twin, Spirit, was pronounced dead in 2011, a year after it got stuck in sand and communication ceased.

Both outlived and outperformed expectations, on opposite sides of Mars. The golf cart-size rovers were designed to operate as geologists for just three months, after bouncing onto our planetary neighbor inside cushioning air bags in January 2004. They rocketed from Cape Canaveral a month apart in 2003.

It’s no easier saying goodbye now to Opportunity, than it was to Spirit, project manager John Callas told The Associated Press.

“It’s just like a loved one who’s gone missing, and you keep holding out hope that they will show up and that they’re healthy,” he said. “But each passing day that diminishes, and at some point you have to say ‘enough’ and move on with your life.”

“It gives you an idea just how long this mission has lasted,” she said. “Opportunity’s just been a workhorse ... it’s really a testament, I think, to how well the mission was designed and how careful the team was in operating the vehicle.”

Rather than viewing the dust storm as bad luck, Callas considers it “good luck that we skirted so many possible storms’ over the years. Global dust storms typically kick up every few years, and “we had gone a long time without one.” Unlike NASA’s nuclear-powered Curiosity rover still chugging along on Mars, Opportunity and Spirit were never designed to endure such severe weather.

Cornell University’s Steve Squyres, lead scientist for both Opportunity and Spirit, considers succumbing to a ferocious storm an “honorable way” for the mission to end.

“You could have lost a lot of money over the years betting against Opportunity,” Squyres told the AP Tuesday.

The rovers’ greatest gift, according to Squyres, was providing a geologic record at two distinct places where water once flowed on Mars, and describing the conditions there that may have supported possible ancient life.

NASA last heard from Opportunity on June 10. Flight controllers tried to awaken the rover, devising and sending command after command, month after month. The Martian skies eventually cleared enough for sunlight to reach the rover’s solar panels, but there was still no response. Now it’s getting colder and darker at Mars, further dimming prospects.

Engineers speculate the rover’s internal clock may have become scrambled during the prolonged outage, disrupting the rover’s sleep cycle and draining on-board batteries. It’s especially frustrating, according to Callas, not knowing precisely why Opportunity — or Spirit — failed.

Now it’s up to Curiosity and the newly arrived InSight lander to carry on the legacy, he noted, along with spacecraft in orbit around Mars.

As for Opportunity, “It has given us a larger world,” Callas said. “Mars is now part of our neighborhood.”