NASA has discovered a distant planet orbited by three "suns" at once by its brand new exoplanet-hunting space telescope TESS. 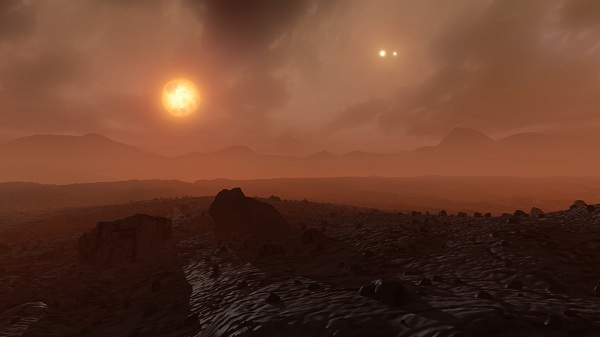 The Transiting Exoplanet Survey Satellite, or TESS, is a space telescope designed for discovering transiting exoplanets by an all-sky survey. Such an instrument currently has finished half of its two-year-long mission since mid-2018.

The planet, named LTT 1445Ab, is about 22.5 light-years away from the Earth positioned in the middle of a triple-star system. The surface temperature is much higher than that on the Earth, which is around 160 degrees Celsius.

The three "suns," to be precise, are three red dwarf stars which are smaller and cooler than the Sun, and they are always invisible to the naked eyes.

Jennifer Winters, of the Harvard-Smithsonian Center for Astrophysics, said, "If you're standing on the surface of that planet, there are three suns in the sky, but two of them are pretty far away and small-looking."

"They're like two red, ominous eyes in the sky," she added.

Due to that the planet passes between those stars and the Earth, and there's a slim chance of us catching a glimpse of the atmospheric gases that surround it through the telescope.

The findings were submitted by Winters' team to "The Astronomical Journal."