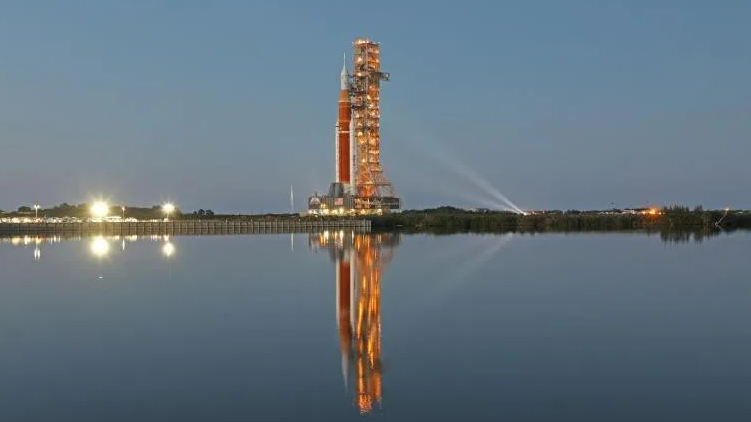 The massive Artemis-1 rocket is illuminated at dusk atop a mobile launch platform en route to Launch Pad 39B from the Vehicle Assembly Building at the Kennedy Space Center in Florida, U.S. /AFP

NASA on Friday began a critical two-day-long test of its giant Space Launch System (SLS) rocket complete with a simulated countdown, as the agency gears up to send humans to the moon again.

Known as the "wet dress rehearsal," it is the final major test before the Artemis-1 mission this summer: an uncrewed lunar flight that will eventually be followed by boots on the ground, likely no sooner than 2026.

"The countdown is now underway," NASA said in its Artemis blog at 5:00 p.m. Eastern Time (2100 GMT), confirming members of the launch control team had been issued their "call to stations."

Data from the test, which ends mid-afternoon on Sunday, will be used to finalize a launch date for Artemis-1. NASA had said May could be the first window, but later now seems likely.

It is called a "wet" dress rehearsal because supercooled liquid hydrogen and liquid oxygen will be loaded into the SLS from the ground systems, just as they would be in a real launch.

The 98-meter rocket – expected to be the most powerful in history at the time it is operational – was rolled out to Launch Complex 39B at the Kennedy Space Center in Florida around two weeks ago.

Teams are now filling up a sound suppression system with water that is used to dampen acoustic energy during lift-off. They will continue to practice every operation that would be carried out in a real launch.

Come Sunday morning, with the SLS rocket and Orion crew capsule fixed atop both powered on, they will load up 700,000 gallons (2.6 million liters) of propellant.

They won't actually ignite the rocket's RS-25 engines, which were tested previously. Instead they will halt the countdown about 10 seconds before liftoff, in order to simulate a "scrub," when launch is aborted due to technical or weather-related issues.

The fuel will be drained, and a few days later SLS and Orion will be rolled back to the vehicle assembly building to carry out checks on how everything went.

Test milestones will be posted on NASA's blog for the Artemis mission, and the public might be able to get a glimpse of the rocket venting vapor on the launch pad on April 3, during tanking operations, on the agency's YouTube channel.

On Monday, agency officials plan to hold a press conference to give further information.

"We're really, really super sensitive to cryogenic launch vehicles that are of this size and capability, (and) are very analogous to ballistic type capabilities that other countries are very interested in," he said, but added that the agency could re-evaluate the position in the future.

The decision has caused some confusion, as commercial launch companies routinely make their countdown audio available, while most intercontinental ballistic missiles run on solid fuel, not liquid propellants.