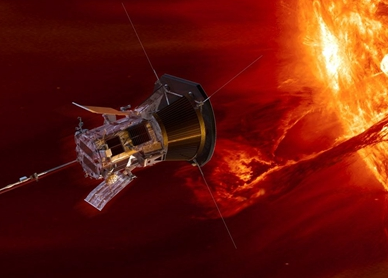 LOS ANGELES (Xinhua) -- NASA's InSight lander has completed the first step to get its heat probe digging again on Mars, according to a release of the InSight mission on Monday.

The mole is a self-hammering spike which will dig as much as five meters below the surface and record the temperature of Mars. However, the mole has not been able to dig deeper than about 30 cm below the Martian surface since Feb. 28.

According to the release, InSight's robotic arm successfully removed the support structure of the mole last week, and placed it to the side. Getting the structure out of the way gives the mission team a view of the mole - and perhaps a way to help it dig.

"We have completed the first step in our plan to save the mole," said Troy Hudson, a scientist and engineer with the InSight mission. "We are not done yet. But for the moment, the entire team is elated because we are that much closer to getting the mole moving again."

Scientists and engineers have been conducting tests to save the mole at NASA's Jet Propulsion Laboratory, which leads the InSight mission, as well as at the German Aerospace Center (DLR), which provided the heat probe.

Based on DLR testing, the soil may not provide the kind of friction the mole was designed for. Without friction to balance the recoil from the self-hammering motion, the mole would simply bounce in place rather than dig, according to the release.

The team plans to press on the soil near InSight using a small scoop on the end of the robotic arm, in a bid to provide the necessary friction for the mole to dig.

According to the mission team, it is also possible that the mole has hit a rock. While the mole is designed to push small rocks out of the way or deflect around them, larger ones will prevent the spike's forward progress.

The team will be discussing what next steps to take based on careful analysis. Later this month, after releasing the arm's grapple from the support structure, they will bring a camera in for some detailed images of the mole, said the release.