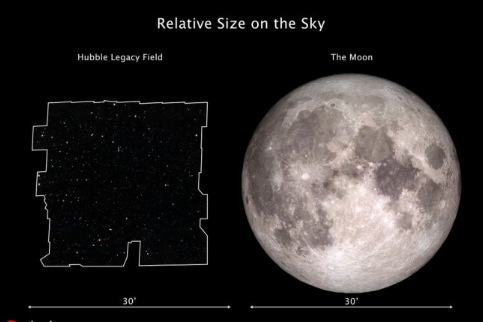 A graphic comparing the dimensions of the Hubble Legacy Field on the sky with the angular size of the Moon. (Photo: IC)

NASA has released a combination photo of 7,500 separate Hubble exposures after 16 years of observations. The image contains 265,000 galaxies that stretch through 13.3 billion years of time, which is just after our universe's birth in the big bang.

Astronomers made the new deep-field image by weaving together exposures from several previous galaxy "fishing expeditions."

The wavelength range stretches from ultraviolet to near-infrared light, capturing all the features of the galaxy's assembly over time.