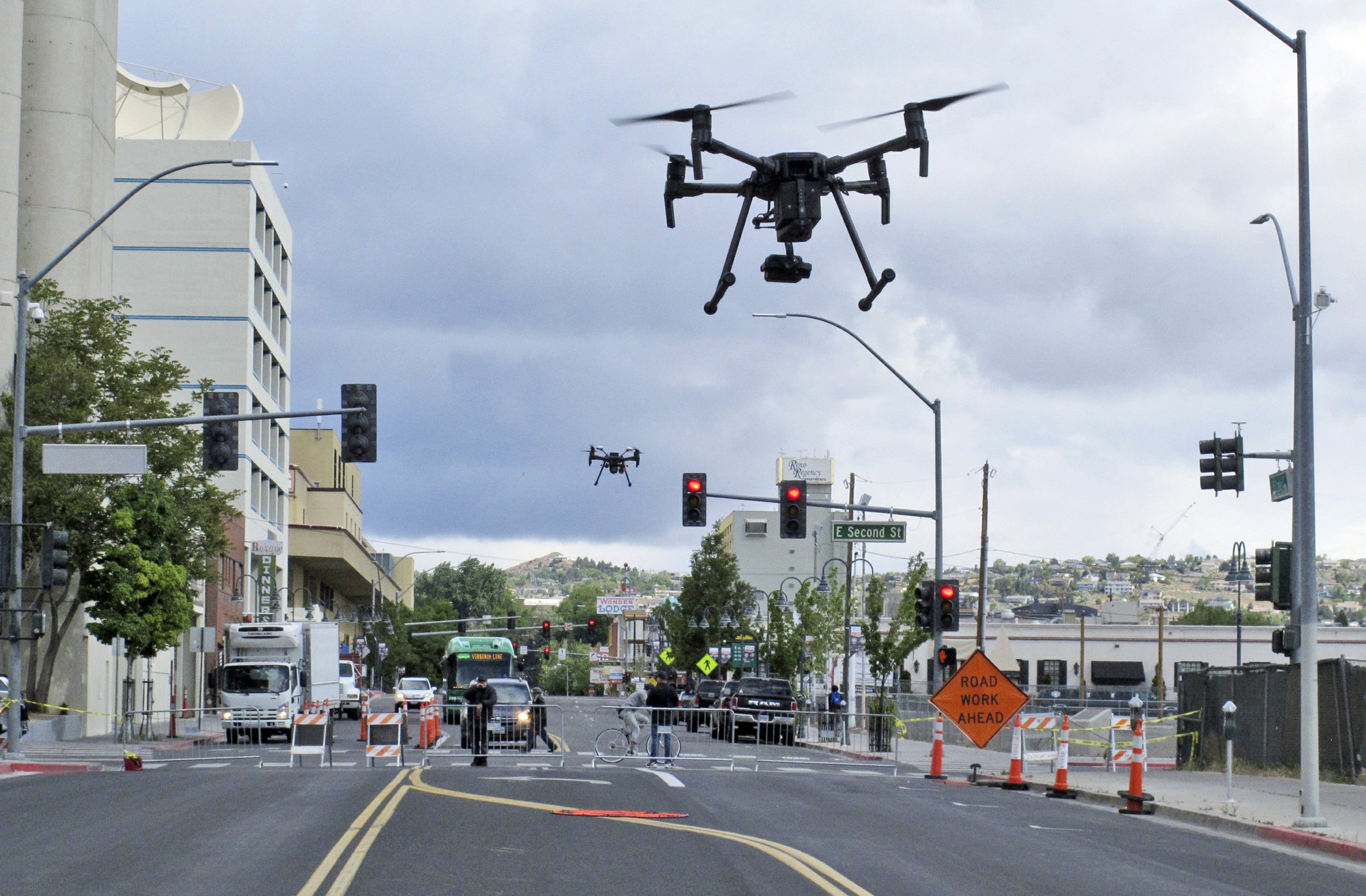 Two drones fly above Lake Street in downtown Reno, Nev., on, as part of a NASA simulation to test emerging technology that someday will be used to manage travel of hundreds of thousands of commercial, unmanned aerial vehicles (UAVs) delivering packages May 21, 2019. (Photo: AP)

NASA has launched the final stage of a four-year effort to develop a national traffic management system for drones, testing them in cities for the first time beyond the operator’s line of sight as businesses look in the future to unleash the unmanned devices in droves above busy streets and buildings.

Multiple drones took to the air at the same time above downtown Reno this week in a series of simulations testing emerging technology that someday will be used to manage hundreds of thousands of small unmanned commercial aircraft delivering packages, pizzas and medical supplies.

“This activity is the latest and most technical challenge we have done with unmanned aerial systems,” said David Korsmeyer, associate director of research and technology at NASA’s Ames Research Center in Mountain View, California.

An autonomous drone took off Tuesday from the rooftop of a five-story casino parking garage and landed on the roof of another out of view across the street. It hovered as onboard sensors adjusted for gusty winds before returning close to the center of the launchpad.

Equipped with GPS, others flew at each other no higher than city streetlights but were able to avoid colliding through onboard tracking systems connected to NASA’s computers on the ground.

Similar tests have been conducted in remote and rural areas. The Federal Aviation Administration has authorized individual test flights in cities before but never for multiple drones or outside the sight of the operator.

The new round of tests continuing this summer in Reno and Corpus Christi, Texas, marks the first time simulations have combined all those scenarios, said Chris Walach, executive director of the Nevada Institute of Autonomous Systems, which is running the Reno tests of unnamed aerial vehicles, or UAVs.

“When we began this project four years ago, many of us wouldn’t have thought we’d be standing here today flying UAVs with advanced drone systems off high-rise buildings,” he said.

The team adopted a “crawl, walk, run” philosophy when it initiated tests in 2015, culminating with this fourth round of simulations, said Ron Johnson, project manager for unmanned aircraft systems traffic management at NASA’s Ames Research Center.

“We are definitely in the ‘run’ phase of this development here in Reno,” he said.

The results will be shared with the FAA. The agency outlined proposed rules in January that would ease restrictions on flying drones over crowds but said it won’t take final action until it finishes another regulation on identifying drones as they’re flying — something industry analysts say could be years away.

Critics assert that the FAA has stymied the commercial use of drones by applying the same rigid safety standard it uses for airlines.

“There can be a lot of Silicon Valley mentality where people don’t want to wait. So, we’re trying to strike a balance between unleashing entrepreneurship and ensuring we’re doing it safely while trying to accelerate acceptance of drones in public,” Johnson said.

Amazon and FedEx are among the companies that hope to send consumer products by drone by 2020. Drone delivery company Flirtey began testing delivery of defibrillators for cardiac arrest patients last year in Reno under FAA oversight.

He said it became apparent early on that the travel management plans for drones would have to be completely automated because FAA air traffic controllers can’t handle the enormous workload.

The system is being tested with the help of 36 private partners, including drone manufacturers, operators, software developers and other third-party service providers, Johnson said.

The system uses software on the ground that communicates flight plans and positions to other software systems. The drones are equipped with programs for landing, avoiding crashes, surveillance, detection and identification, optical cameras and systems similar to radar that work with lasers.

Huy Tran, director of aeronautics at NASA’s Ames Research Center, said her supervisors at NASA headquarters were surprised to hear they had be testing drones in Reno.

“They said, ‘Are you crazy?’” she said. “We hope (the test in) Reno shows drones can be flown and land safely.”