LOS ANGELES, June 6 (Xinhua) - Scientists and engineers have worked out a new plan for getting NASA InSight lander's heat probe digging again on Mars, according to a latest release of NASA's Jet Propulsion Laboratory (JPL). 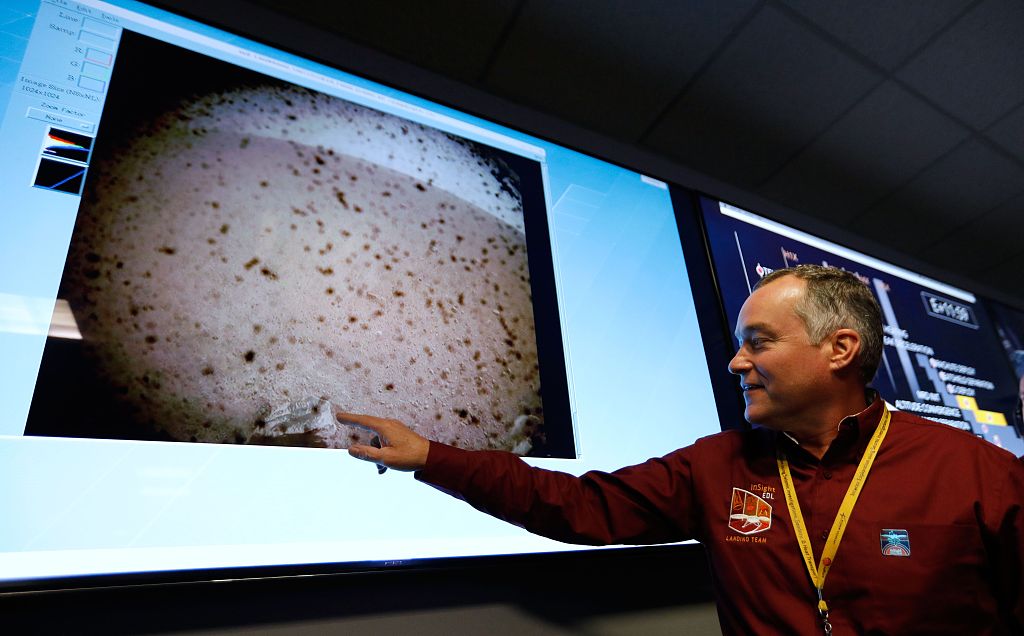 NASA engineer and InSight project manager Tom Hoffman points to the first image upon a successful landing by the InSight spacecraft on the planet Mars from the Mission Support area in the Space Flight Operations facility at the NASA Jet Propulsion Laboratory (JPL) in Pasadena, California on November 26, 2018. (File photo: VCG)

The heat probe, also known as the "mole," is designed to dig below the Martian surface and measure the heat coming from inside the Red Planet.

As part of the heat probe, the mole is a self-hammering spike which will dig as much as five meters below the surface and record the temperature of Mars.

The mole has not been able to dig deeper than about 30 cm below the Martian surface since Feb. 28, 2019.

In the last several months, scientists conducted testing and analysis to understand what prevented the mole from digging.

They believe the most likely cause is an unexpected lack of friction in the soil around InSight -- something very different from soil seen on other parts of Mars. Without enough friction, the mole will bounce in place, according to JPL.

"Engineers have been working hard to assess the problem," said Lori Glaze, director of NASA's Planetary Science Division. "Moving the support structure will help them gather more information and try at least one possible solution."

The lifting sequence will begin in late June, with the arm grasping the support structure. Over the course of a week, the arm will lift the structure in three steps, taking images and returning them so that engineers can make sure the mole is not being pulled out of the ground while the structure is moved, according to JPL.

InSight landed safely on Mars on Nov. 26 last year, kicking off a two-year mission to explore the deep interior of the Red Planet.