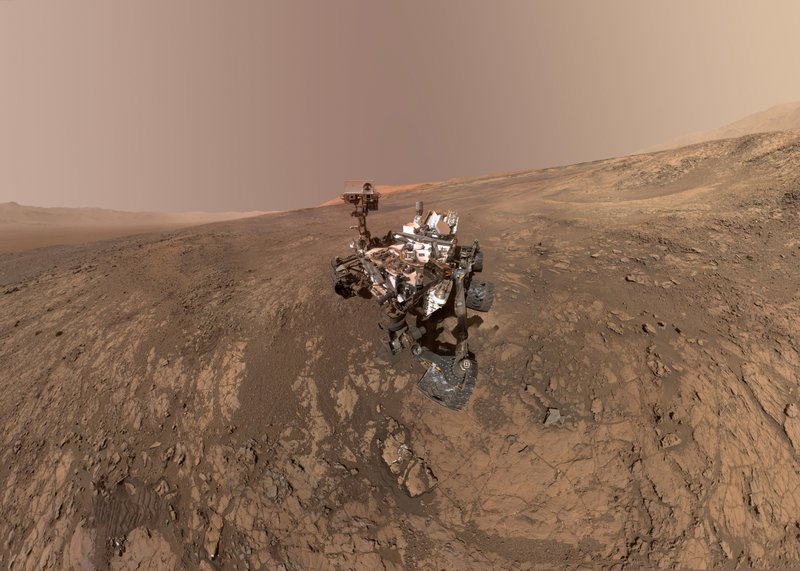 This composite image made from a series of Jan. 23, 2018 photos shows a self-portrait of NASA's Curiosity Mars rover on Vera Rubin Ridge. (Photo: AP)

LOS ANGELES, Feb. 12 (Xinhua) -- NASA's next Mars rover has arrived in Florida to begin final preparations for its launch to the Red Planet this July, according to a release of NASA's Jet Propulsion Laboratory (JPL) on Wednesday.

"Our rover has left the only home it has ever known," said John McNamee, Mars 2020 project manager. "The 2020 family here at JPL is a little sad to see it go, but we're even more proud knowing that the next time our rover takes to the skies, it will be headed to Mars."

Assembly, test and launch operations for Mars 2020 began in January 2018. The first piece of hardware that would become part of the rover arrived on the clean room floor of JPL's Spacecraft Assembly Facility a few months later.

The rover's aeroshell -- its protective covering for the trip to the Red Planet -- arrived at Kennedy in December 2019. Early on Feb. 11, the rover, cruise stage, descent stage and mission support equipment headed in four police-escorted trucks to the US Air Force's March Air Reserve Base, where they were loaded aboard the two waiting C-17s.

Within hours of arriving at the Shuttle Landing Facility at Kennedy Space Center, the 11 pallets of Mars 2020 spacecraft will be transported to the same spacecraft processing facility that in 2011 handled NASA's Curiosity rover, according to JPL.

Later this week, the Mars 2020 assembly, test and launch operations team will begin testing the components to assess their health following the cross-country flight.

After months of final assembly and additional testing, Mars 2020 should be enclosed in its aeroshell for the final time in late June, according to JPL.

It will be delivered to Cape Canaveral Air Force Station's Launch Complex 41 to be integrated with the United Launch Alliance Atlas V rocket that will hurl it toward Jezero Crater in early July.

Mars 2020 will collect and store rock and soil samples in sealed tubes and will search for signs of past microbial life, characterize the planet's climate and geology, and pave the way for human exploration, said JPL.

Subsequent missions, currently in the planning stages, will return to Jezero Crater, gather the samples collected by Mars 2020 and return them to Earth for in-depth study, according to JPL.