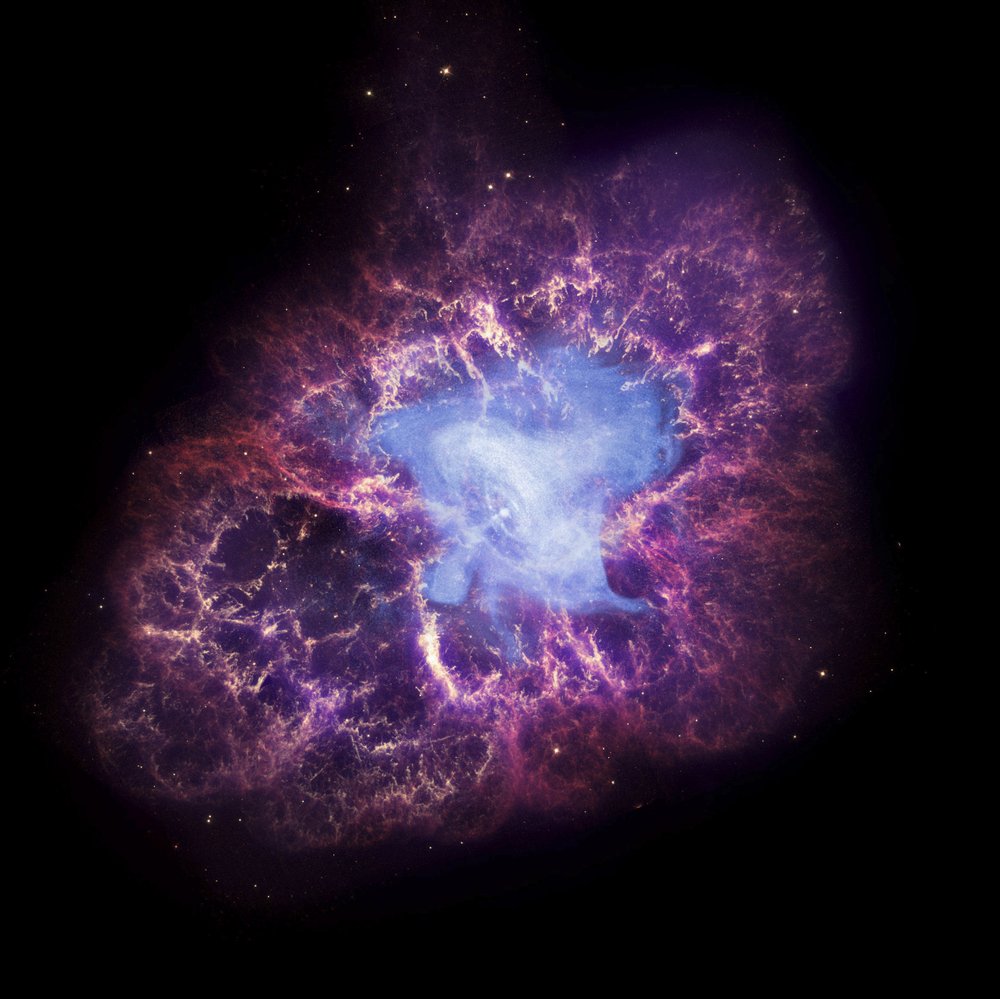 This composite image made available by NASA shows a neutron star, center, left behind by the explosion from the original star's death in the constellation Taurus, observed on Earth as the supernova of A.D. 1054. (Photo: AP)

NASA is pulling the plug on one of its great observatories -- the Spitzer Space Telescope -- after 16 years of scanning the universe with infrared eyes.

For years, Spitzer peered through dusty clouds at untold stars and galaxies, uncovered a huge, nearly invisible ring around Saturn, and helped discover seven Earth-size planets around a nearby star.

An estimated 4,000 scientists around the world took part in the observations and published nearly 9,000 studies, according to NASA.

Designed to last just 2.5 years to five years, the telescope got increasingly difficult to operate as it drifted farther behind Earth, NASA said. It currently trails Earth by 165 million miles (265 million kilometers), while orbiting the sun.

Spitzer will continue to fall even farther behind Earth, posing no threat to another spacecraft or anything else, officials said.

“Although it would be great to be able to operate all of our telescopes forever, this is not possible,” NASA’s astrophysics director Paul Hertz said in an email.

NASA originally planned to decommission Spitzer a few years ago, but put off its demise as the James Webb Space Telescope, a vastly more elaborate infrared observatory, kept getting delayed.

Webb’s launch is now off until at least early next year. This week, the Government Accountability Office warned of further delays because of technical challenges.

It had been costing NASA about $12 million a year later to keep Spitzer going. Hertz said with “no guarantee” Spitzer would last until Webb’s launch, the decision was made to shut it down now.

Launched in 2003, Spitzer was the last of NASA’s four so-called great observatories. With its infrared instruments, it was able to sense heat coming off celestial objects like night vision goggles, said Suzanne Dodd, a former project manager who now oversees NASA’s Deep Space Network at the Jet Propulsion Laboratory in Pasadena, California.

By seeing through dust, “we’re lifting the cosmic veil on the universe,” Dodd said.

Still sending back breathtaking pictures, the Hubble Space Telescope rocketed into orbit in 1990 to observe the cosmos in visible and ultraviolet light; it will celebrate its 30th anniversary in April.

The Compton Gamma Ray Observatory was launched in 1991, but because of equipment failure was destroyed in a fiery re-entry in 2000. The Chandra X-Ray Observatory is still working since its 1999 launch.