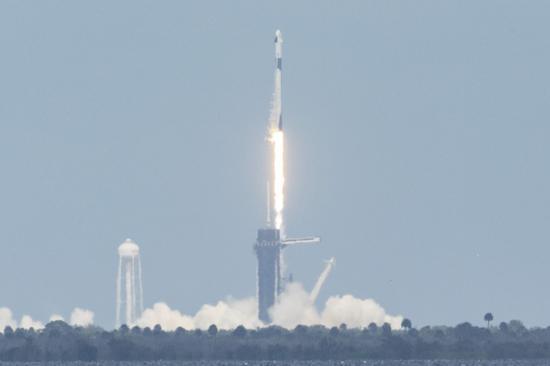 SpaceX Falcon 9 rocket carrying the Crew Dragon spacecraft with two astronauts takes off from NASA's Kennedy Space Center in Cape Canaveral of Florida, the United States, on May 30, 2020. (Photo: Xinhua)

NASA and SpaceX are targeting 2:40 a.m. EDT on Oct. 31 for the launch of the agency's SpaceX Crew-1 mission with astronauts to the International Space Station (ISS), according to a NASA briefing on Tuesday.

Astronauts Michael Hopkins, Victor Glover, and Shannon Walker of NASA and Soichi Noguchi of the Japan Aerospace Exploration Agency will be carried to the station on the SpaceX Crew Dragon spacecraft on a Falcon 9 rocket from Launch Complex 39A at NASA's Kennedy Space Center in Florida.

The launch will be the first time an international crew will fly aboard a NASA-certified, commercially-owned and operated American rocket and spacecraft from American soil, said NASA.

Following the launch, the Crew-1 astronauts are scheduled to arrive at the space station for a six-month science mission aboard the orbiting laboratory.

NASA is in the final stages of the data reviews needed ahead of certification following the agency's SpaceX Demo-2 test flight launched on May 30 and returned on Aug. 2 this year.

The return of the test flight with the two astronauts from the ISS marked the first splashdown of an American crew spacecraft in 45 years.

"SpaceX training of astronauts that will fly on board Dragon's first operational mission is complete! When the crew arrives for pre-launch preparations at the launch site, they will participate in a run-through of day-of-launch activities with the launch and pad operations teams," the company tweeted.

NASA's Commercial Crew Program has worked with several American aerospace industry companies to facilitate the development of U.S. human spaceflight systems since 2010. The goal is to have safe, reliable and cost-effective access to and from the ISS and foster commercial access to other potential low-Earth orbit destinations.

NASA selected Boeing and SpaceX in September 2014 to transport crew to the ISS from the United States.

These integrated spacecraft, rockets and associated systems will carry up to four astronauts on NASA missions, maintaining a space station crew of seven to maximize time dedicated to scientific research on the orbiting laboratory, according to NASA.