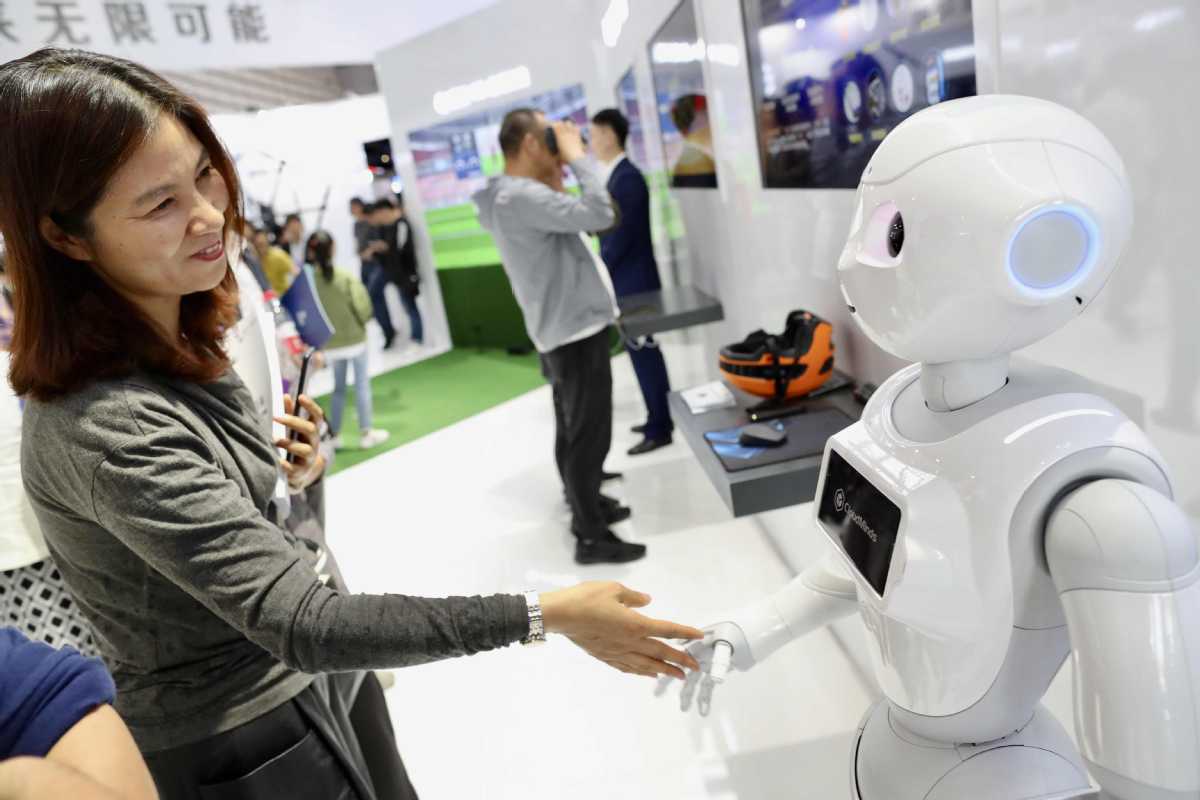 A visitor shakes hands with a 5G robot at China Mobile's display area during the Light of Internet Expo at the sixth World Internet Conference in Wuzhen, Zhejiang province, on Sunday. (Photo: China Daily)

Artificial intelligence is poised to become a core industry by 2030

China's artificial intelligence industry has ushered in a new age of development as the technology matures and demonstrates real-world applications, said experts at the AI forum held at the sixth World Internet Conference, or Wuzhen Summit, on Monday.

Chen Zhaoxiong, vice-minister of industry and information technology, said that the application of AI can be widely found in the fields of medical services, transportation, finance and education. Traditional industries have been upgraded and transformed, while the efficiency of the country's economic development has improved.

China is implementing a national AI-development plan that aims to build a 1 trillion yuan ($141 billion) core artificial-intelligence industry by 2030, which is expected to stimulate growth in related businesses valued around 10 trillion yuan.

Peter Riedl, vice-president of BMW Group Technology Office China, said that the openness of the Chinese market toward the adoption of AI, strong local partners, such as Baidu, and keen entrepreneurship in China will help BMW to get a better understanding of the market demand for AI, which is "a key driver for future mobility solutions".

Zhou Bowen, director of JD AI Research, said that the Chinese AI industry has accumulated a huge amount of data over the past few years. The talent pool has been very much enriched by favorable government policies.

"The capital market's pursuit of AI in the past few years has cooled down lately. The market is now keeping an eye on the scenarios in which AI has already been adopted. In this sense, the trusted AI technologies will mark a new phase when smart industries can truly become integrated and bring innovative results," he said.

Sheng Ronghua, vice-minister of the Cyberspace Administration of China, said that AI technology has become the new engine of China's economic development. To foster the continued development of the AI industry in China, Sheng suggested that companies and institutions tap into the untouched areas of AI applications to come up with more results in theory, methods, tools and systems.

"The development of AI should aim to improve people's living standards. More importantly, its development should be orderly to ensure the technology is both reliable and controllable," he said.

Pan Yunhe, an academician at the Chinese Academy of Engineering, said the AI industry will be short of continued impetus if it only focuses on smart manufacturing, which is the case among most Chinese AI companies at present. He added that intelligent business management and more intelligent product-innovation processes are crucial to the development of AI.

"Intelligent supply-chain-management systems are at their embryonic stages among most Chinese companies, but they will be the theme of their development in the next few years. More intelligent industries in China will lay the groundwork for the next stage of development of the country's AI technology," he said.